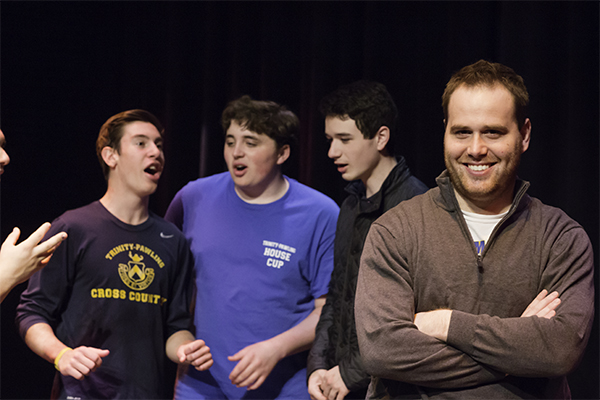 This weekend, the Trinity-Pawling Drama Society performs The Producers at Gardiner Theater. Continuing on a productive streak of showcasing outstanding shows, Director Pat Hitschler will direct his fourth comedy production at Trinity-Pawling. We had a conversation with Pat about directing, teaching boys, and comedy.

The Quad: Is it more difficult to direct a comedy than a drama?

Hitschler: They each have their own benefits and dilemmas. Comedies rely more on timing, but on the other hand they have more freedom to adapt and take things to the nth degree. Dramas rely a lot on the emotions and a realistic feel but there is typically less movement to worry about. Myself, being primarily a comedy actor, it is much easier to teach comedies where I can just have a lot of fun with the blocking and movement of a scene.

The Quad: What’s the best comedy scene you’ve ever directed?

Hitschler: Probably the scene in One Man, Two Guv’nors where the main character of the show was trying to serve both of his bosses at the same time without them seeing each other. We put it on this past fall, and it took about a week to block out, but it ended up becoming the highlight of the show.  It also featured an actress that was pretending to be an audience member. She was thrown around the stage and hit in the face with a pie, and the audience had no idea that she was part of the show.

The Quad: Is it hard to make an audience laugh?

Hitschler: It is much easier to make them laugh than to get them to cry, I will say that. Laughter is contagious so when one person laughs others will almost certainly join in. The written lines do the majority of the work, and then the timing and persona of the actors does the rest.

The Quad: How do you feel when things “go wrong” on stage?

Hitschler: There is not much you can do about it.  You rehearse in the hopes that everything goes right, but things will always go differently in front of a live audience. I cringe a lot when I am back stage – when I see that a prop was not where it should be or a actor misses a cue – but the show usually finds a way to figure itself out again.

The Quad: What prepared you best for being a director?

Hitschler: Being involved in many different shows with very different directors. Mostly though, it was just about being a leader in other aspects of life. Whether it was on sports teams or class projects, I was always trying to be the leader. I was not always successful but I always wanted to be in charge and have all the pressure on me.

The Quad: What’s your recipe for teaching teenage boys how to act?

Hitschler: Let them have fun.  They will not want to be in the shows if they are not constantly having fun.  I am serious when it gets down to the last couple weeks before a show, but besides that I try to keep it very enjoyable and very energetic.

This production of The Producers is sure to be a hit. Don’t miss performances on Friday, April 7 and Saturday, April 8 at 7:00 PM at Gardiner Theater.