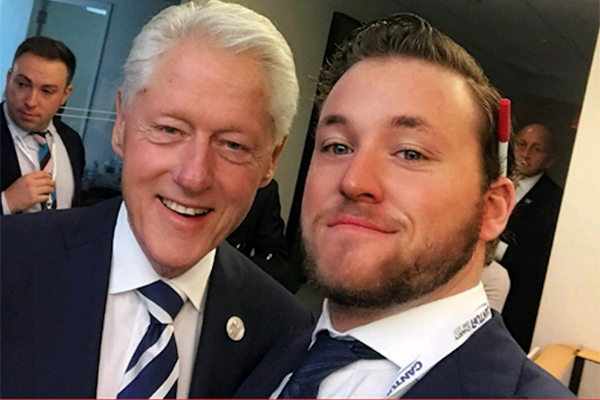 Jacques Zelnik ’11 began working as a Law Clerk at Cantor Fitzgerald this past May. He is in his final year of law school at New York Law, focusing on corporate transactional work. Between his rigorous schoolwork and demanding clerk responsibilities, Zelnik emphasized the importance of organization and time management—both skills he mastered during his years at Trinity-Pawling.

“The Effort System stuck with me,” Zelnik started. “I see it coming through in my work for law school and Cantor—both where I have to give 110% of my life. T-P kept me organized and taught me how to manage my time and maintain a disciplined schedule.” There are days when Zelnik is the first one to arrive at the Cantor offices and the last one to leave. That, he said, comes from his Trinity-Pawling education.

As an employee of Cantor Fitzgerald, Zelnik had the opportunity to attend the financial firm’s annual 9/11 Charity Day last week. He explained that the company was headquartered on floors 101 to 105 of the One World Trade Center when the tower was struck on September 11, 2001. Cantor lost two-thirds of their workforce—658 employees—to the terror attacks that day.

On September 11 of this year, as in past years, Cantor held its annual 9/11 Charity Day, which raises money for the memorial, funded by Cantor. Celebrities, including Robert DeNiro and Michael J. Fox, as well as famous political figures such as Bill Clinton, filled the trading floor. “The profits from the trades made throughout the day are donated to the memorial fund,” Zelnik shared. “Last year, Cantor raised about $15 million. It’s incredible.” Zelnik takes great pride in being a member of Cantor’s team this year as they continue to honor those who were lost and the families affected on that tragic day. He values the opportunity to be a part of such a community-conscious and compassionate organization. Zelnik is hopeful to stay with Cantor Fitzgerald following his graduation from law school next May.