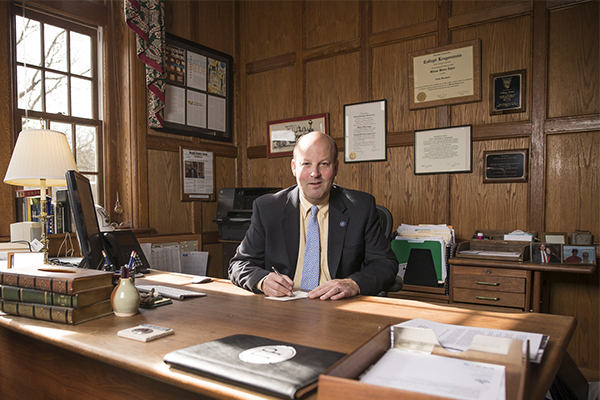 In reflecting on Dr. Morrison’s presentation, Headmaster Bill Taylor stated, “Her focus on the changing nature of work and how educational institutions must be able to adapt to ensure that they are preparing their graduates for a work world that will be less centralized, more flexible, and more innovative is very relevant to the skills we are teaching at Trinity-Pawling.” Taylor continued, “Dr. Morrison’s emphasis on the dynamic between the changing demographics of college-age students and the affordability gap for higher education was insightful. This is a dynamic that independent schools began to see shortly after the 2008 recession in the elementary grades. It is now working its way through the entire span of the educational system:  fewer students and a higher difficulty to pay the full cost of tuition.”  Taylor took particular interest in Dr. Morrison’s emphasis on the historical importance of immigration with regard to our overall national citizenry as well as to the depth and value of our human capital as a nation. “Certainly, we have found the international aspect of our student community to be critically valuable to the fabric of the student population and the depths of gifts and talents from the entire student body,” Taylor concluded.

“Educational institutions can only be responsive if the people within them are responsive,” says Taylor. “If educators don’t care or are not aware of the need to be responsive to students and situations, then schools become self-­focused and self­-serving.”  Trinity­-Pawling embraces the creative and valuable tension that exists between being traditional AND being innovative. With a rich history, grounded in traditions, Trinity-Pawling is on a solid foundation—able to be responsive, and to innovate in areas that are critical, such as preparing our students to be more adaptable in a rapidly changing world.

Trinity-Pawling is also being responsive in its approach to strategic planning. Since 1990, the School has created three outstanding Long Range Plans. They were plans that offered strategic vision and goals for the next ten years. “The pace of change has accelerated so fast that it is difficult to anticipate the next three years, much less the next ten years,” says Taylor.  “I was on the Long Range Planning Committee in 2000, for example. While we focused on technology, we could not foresee the explosion of wireless technology and the SmartPhones that emerged in the second half of that decade.”

This academic year, Trinity-Pawling will embark on the process of developing a new strategic vision. Committees at the Board and Faculty/Administration levels will be coordinated and those educators will be charged with strategic visioning, primarily focusing on the next three years, and on long-term goals as well.