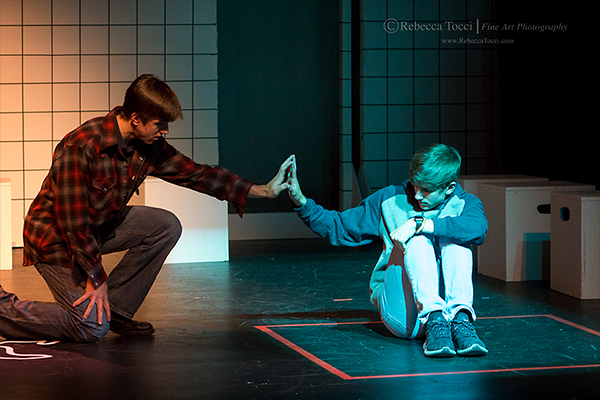 On November 14, 15, and 16, Trinity-Pawling Theater Department presented four performances of The Curious Incident of the Dog in the Night-Time, after weeks of rehearsals and preparation. Following the upper school’s summer reading of the Mark Haddon novel by the same name, the boys attended evening showings of this deeply considerate coming-of-age story. “Labels say nothing about a person, they just categorize them,” says Theater Director Kent Burnham. “I believe this is a story about difference, about being an outsider and finding the courage or bravery to create your own journey.”

Jackson McAvoy ’21 showcased his budding talent in the lead role of Christopher, an autistic teenager living with his single father, played by Solomon Hess ’20. Christopher defies expectations as he takes A-level mathematics, and then battles to find painful truths as he is exposed to the vagaries of death and love. The simple set design, bordered by the narrative voice of Ben Yoon ’20, showcased Christopher’s strength as he navigates the deep questions that arise for young adults — no matter who they are or where they come from.

Congratulations to the many Trinity-Pawling boys and young women in our greater community who came together and produced such an incredible show!