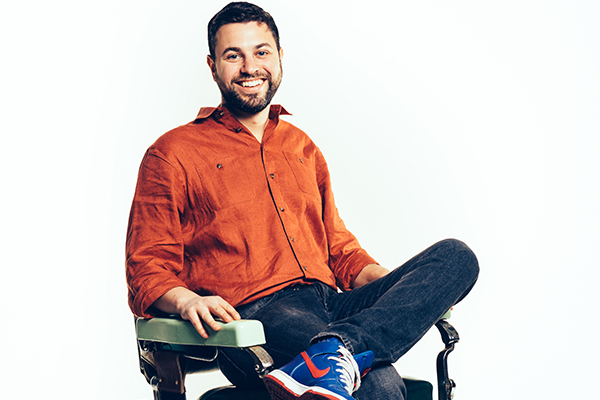 Every guy shaves. Casey Perkal ’07 is determined to make that experience more pleasurable.

Perkal had issues with men’s grooming products available. Gillette had cornered the market but the products were expensive. Harry’s and Dollar Shave Club offered convenience and cheaper options, but the quality just wasn’t there.

“Men spend a couple hundred bucks each year on shaving materials,” Perkal explained, “and the average person throws a razor blade away every two weeks. My business partner and I decided to develop Shave Face, a company that offers sustainable and healthy men’s grooming products.” Their logo? “Save money, save planet, shave face.”

Perkal and his friend launched Shave Face in January 2015 with a Kickstarter campaign. That allowed the men to create a run of strops and test people’s interest. The 30 day campaign raised the necessary funds and proved the public was supportive.

“We took an old school concept from the barbershop and retooled it for the 21st century. Men can take their favorite disposable razor and run it along the leather strop to align, hone, and clean the blade. This practice takes a few seconds and makes the blade last three to five times longer.”

Perkal had been midway through law school and realized he really wanted to be an entrepreneur. “My parents opened Cartoon Cuts when I was a little kid. It’s now a chain of children’s hair salons where kids can watch cartoons while they get their hair cut. The idea sprang from my brother and me being pains in the butt. So entrepreneurialism runs in my family.”

Shave Face has added new products: an aftershave balm and a shave and beard oil, all made with natural and organic ingredients. Upholding their commitment to environmental sustainability, they created a razor case using leftover scraps of leather from the strops. The case slips over the top of any disposable razor to protect the blade from dings and bacteria in your dop kit and save your fingers from nicks.

“The public has been really responsive,” said Perkal. “We’ve gotten good press in Entrepreneur Magazine in December 2015 and are on lots of blogs and websites like Thrillist.” Starting this summer, Shave Face is partnering with Buffalo Trace bourbon, appearing at pop up markets in eight major cities. “We’re building a combination barbershop-whiskey tasting bar onto a trailer which we’ll drive from city to city. People can get a hot shave from a local barber and then taste some bourbon. 35,000 people come through these events!”

“You can cut corners in certain areas of life,” Perkal reflected, “but starting a business is not one of them. Developing my own company sure beats sitting at an office desk.” Check out www.shaveface.com to see their touring schedule later this summer and fall.