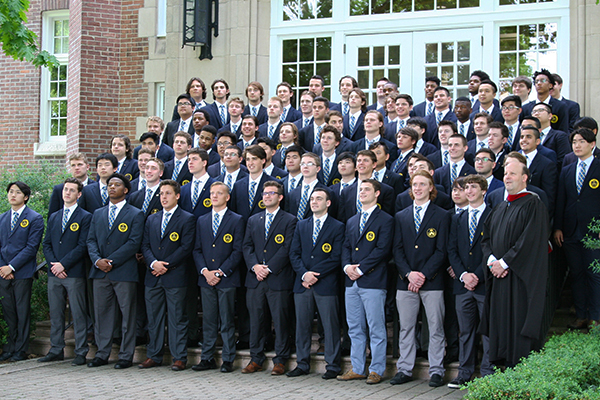 Trinity-Pawling School held its 109th Commencement Exercises on Sunday, May 29, 2016, and celebrated the graduation of 79 students. It was a joyous occasion that highlighted the many talents and endeavors of the Class of 2016. The ceremony featured a number of speakers, and the presentation of awards and diplomas.

Among the speakers was international relations expert Captain Kevin Emore ’99, who gave the Commencement address. Among other things, Emore spoke to students about the importance of allowing oneself to be vulnerable in order to make lasting connections in life. He charged the students, saying, “When you are in a conversation and have the opportunity to share something honest and difficult, do it. Doing so will change everything—from your daily interactions with Uber drivers, to the relationship you have with your partner or your friends. Authentic connections with others are what separate true leaders from managers and bosses,” Emore stated.

Headmaster William Taylor and Head Prefect Caelahn Bullen ‘16 each echoed Emore’s sentiment regarding connections. “Stay connected to one another, to your brothers, and stay connected to this place. Doing so will enrich your time in your future years, I promise you.” said Taylor. Bullen ’16 referred to Trinity-Pawling as his “second home”. “To me, home is not defined as the place you grew up. It’s defined by the memories and meaningful connections you make with each other.”

Valedictorian Trung Le spoke of transitions – adapting to the United States from Vietnam, learning to speak a new language and to acquire a taste for new foods, and now the transition from high school to college, which Le compared to “finishing a Rubik’s Cube and starting another, bigger Rubik’s Cube.”

We congratulate the Class of 2016 and know that each of you will go on to do great things. Good luck in all of your endeavors in college and beyond!