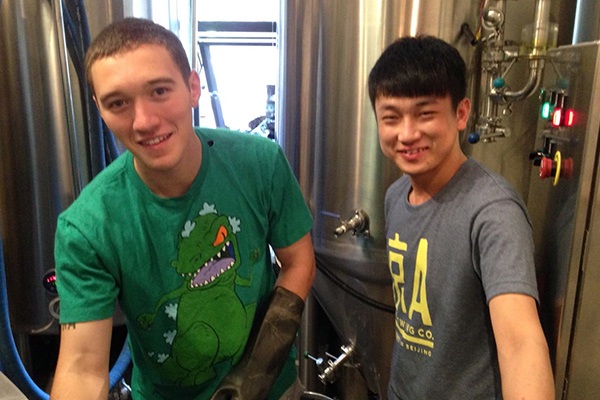 As a sophomore, Ryan Olstein ’11 was already taking both Spanish and French when he decided to join Trinity-Pawling’s inaugural Chinese language program in 2008. Inspired by his mother, a student of languages herself and a seasoned traveller, Ryan wanted to equip himself for similar adventures. At Trinity-Pawling, he gained not only classroom experience but also the chance to immerse himself in Chinese culture through T-P’s exchange program with St. Paul’s School for Boys in Hong Kong.

“That experience showed me that Chinese was something I was passionate about,” Olstein says. Now a senior at the College of William & Mary, Olstein grabbed the chance to increase his language skills this past summer during an internship with Jing A, a Beijing brewing company.

Jing A is part of the local craft beer movement that is just beginning to take off in China. During the work week, Olstein supported the marketing and sales side of the business, then helped with outreach events on the weekend. “It was definitely a ‘learning on the fly’ experience,” he says. “I was pretty much on my own, and I had to figure out how to handle daily life, plus adjust to their culture and try to assimilate. It was a challenge, but I loved it.”

Olstein hopes to land a full-time job in Hong Kong or Beijing upon graduation. Meanwhile, he attributes much of his success back to “Ms. Rydberg; she always challenged us at T-P to use only Chinese in the classroom. It was a great learning experience.”