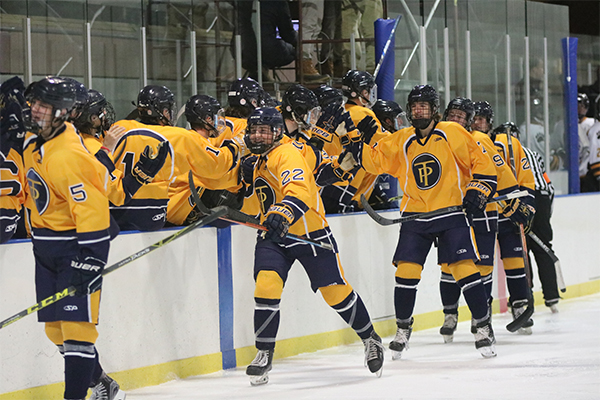 Win after win — things are looking up for the Trinity-Pawling winter sports.

To start off the 2016-17 season the varsity wrestling team traveled to Hopkins School to compete in the Rumble on the Hill Tournament. The Pride came away with a second place finish, highlighted by four individual champions. Senior captain, Jeff Thompson demolished his way through the 195 bracket, David Bancroft ’19 came away with a decisive victory at 120 pounds, and brothers Zack ’19 and Jake Conlan ’19 were unstoppable in the middle weight classes.

New sophomore Brett Ginac, Conrad Adams ’18 and Troy Lois ’17 all had impressive days to finish third, while Matt Trainor ’18 came away with a fourth place finish.

The following week, the team destroyed Loomis Chaffee (50-10) and Marvelwood (63-9), where seniors Dennis Ilmela and Will Dencker led the team with impressive pins.

Last Saturday, the team traveled to the Loomis Duals where they crushed Avon (58-18) and Green Farms (58-12) but suffered losses to both Brunswick and St. Benedicts. Jeff Thompson ’17 and Jake Conlan ’19 remain undefeated with perfect 9-0 records on the season.

Varsity basketball has also been fantastic thus far with a perfect 3-0 record. The Pride opened the season with a 74-41 crushing of Gunnery led by Korey Lee ’18 with 21 points including four three pointers.

The Pride would follow that up with a 62-52 defeat of Westminster where Lee would again lead the scoring, while Nikkei Rutty ’18 added 11 points and Beau Smith ’18 chipped in with 10. On Saturday, the Pride would stay undefeated when they took down Salisbury 57-50. Luis Cartagena ’17 scored a season best 18 points while Jonathan Girard ’17 nearly completed a double-double with 11 points and eight rebounds.

Varsity squash is 2-1 on the season with two impressive wins over Millbrook (5-2) and Suffield (7-0). Pride newcomer, Oosie Imoro ’17 has led the team from the #2 position with three straight victories to remain undefeated on the year. Also new to the team, Ibrahim Bekhiet ’19 has taken over the #1 spot and is 2-1 on the season with a very strong performance against Millbrook.

Returning seniors, Ty Gundrum, Hunter Olstein, and Chris Taylor occupy the second half of the starting lineup and bring experience and leadership to the squad.

Varsity hockey is 0-4 in the second season under Head Coach Robert Ferraris ’93. The Pride started off with two losses to Loomis Chaffee and Albany Academy. This past week, the young team managed to score twice on Avon Old Farms in a 4-2 loss and then was able to take Brunswick into overtime on Monday night at home. The Bruins scored three minutes into OT, but the Pride fought hard throughout the competition.

Joey Musa ’19 has managed one goal and one assist on the year while Ray Zimmerman ’17 leads the squad with two assists. Ryan Winn ’17 scored the opening goal against Avon Old Farms and leads the defense on the ice.

The ski team has yet to compete due to lack of snow, but are primed and ready to go come January.