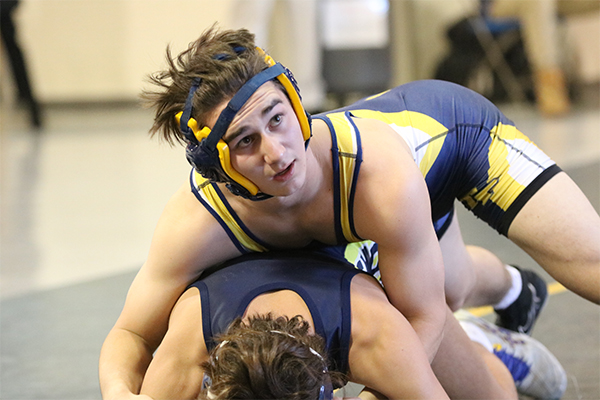 Last Wednesday the varsity wrestling team faced off against Choate in a matchup of the two top teams in the Founders League.  The Blue and Gold got off to an early lead with pins from sophomores Brett Ginac and Jake Conlan.  The Wild Boars fought back with a couple wins at the upper weight classes, but Captain Jeff Thompson ’17 then secured a win over the Choate captain in the most anticipated match of the afternoon. Thompson remains undefeated on the season with a record of 20-0.  Juniors Matt Trainor and Conrad Adams concluded the victory for the Pride with two pins in the lower weight classes to bring home the Founders Championship for the boys.

The varsity wrestling team is 11-4 on the year and will be fighting for the Western New England Championship on February 11th.  Thompson along with sophomores Jake Conlan, Zack Conlan and Dave Bancroft will look to repeat as individual Western Champs from 2016.

Varsity basketball is 10-5 on the season and looking strong going into the final month of the season.  In the past few weeks, T-P dominated Avon 80-53 and took down Taft twice in as many weeks.

Last Saturday the Pride defeated Hotchkiss 55-54 in a game that came down to the last second.  T-P, down by six points in the fourth quarter fought back to take the lead in the final minutes and held off the Bearcats until the final buzzer.  Luis Cartagena ’17 led the way with 20 points as Nikkei Rutty ’18 dominated with 10 rebounds.  Co-Captain Kevin Salis ’17 added 11 points while Korey Lee ’18 came off the bench and chipped in with nine big second half points of his own.

JV basketball is 2-6 led by Will Rickert ’19 and Shane Montague ’18.  Thirds Basketball is 8-0 on the season led by sophomores Max Kesicki and Ryan McBeth.

The varsity squash team is 5-5 on the season with big wins over Kent (5-2) and Westminster (6-1).  According to the coaches, it has been over 10 years since T-P defeated Westminster in squash.  Oosie Imoro ’17 defeated Westminster’s #2 player with ease as he continues his dominance for the Blue and Gold.  On a side note, a few weeks ago, in a team loss to national powerhouse Avon Old Farms, Oosie had a memorable match against a top ranked Rhino that ended in a five-set loss, but resulted in Oosie being put on the map as one of the best high school squash players in New England.

Brothers, Ibrahim Bekhiet ’19 and Abdallah Bekhiet ’18 have been fantastic at the #1 and #3 spots respectively.  Ibrahim has held his own against some of the top players in the nation, while Abdallah has dominated against Founders League teams.

Varsity hockey is 3-12 on the year with wins over Kent (6-3), Choate (4-1) and Lawrenceville (7-2).  Against Choate, Chris Connolly ’17 returned from injury to score two goals in his first game back on the ice for the Pride.  Brendan Lantieri ’17 and John Garvey ’19 each added another goal for the Blue and Gold to secure a victory over the Founders League foe.

Justin Lampert ’17 has been solid between the pipes for the Pride, while seniors Jordi Jefferson, Ray Zimmerman, and Zack Mazur have taken over as leaders of the young Pride team.

Varsity skiing is led by Tommy Poulin ’19 and Jackson Wang ’17.  The team next competes at the BSL David Rockwell GS Championship at the Sundown Ski Area.