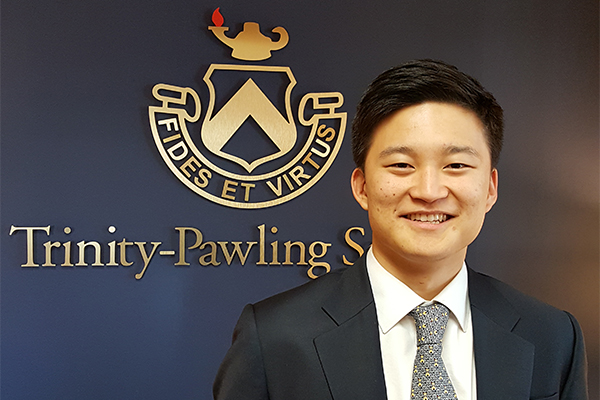 Jay Choi took one tie with him to UC Berkeley, his Vineyard Vines class tie. “That tie reminds me of the lessons I learned at T-P: being responsible and taking care of others.”

As a freshman at Berkeley, Choi identified three areas of student concern: campus safety, increased support for international students, and expanded study abroad opportunities. “I saw these as problems and wanted to advocate for solutions so I decided to run for student government.”

Choi campaigned during the spring of his freshman year and earned a seat as a senator, a coup for a first year student. (His campaign slogan? “The Best Choi-ce”) The Associated Students of the University of California [ASUC] is the most powerful student government in the United States with a long and storied history dating back to 1887.

As one of 20 ASUC senators, Choi spent his sophomore year immersed in the legislative process. “I didn’t fully realize the scope of what I was getting into. Being a senator consumed my life but it was so worthwhile.” The ASUC oversees a $2 million budget, allocating those funds to student organizations, and Choi managed an office of 25 students. “I’m probably the least political person in the Senate but I am proud of what we accomplished. My office established a campus safety committee that has created a bridge between campus and city police and the student body. We are now working together to protect our students and solve problems.”

Choi is glad he dedicated his sophomore year to serving others. “I’ve had my taste of politics and being the Big Man, but now it’s time to get back to my studies and friends and achieve a little more balance in my life.”

He credits his time at Trinity-Pawling for honing his values. “T-P taught me about personal obligation and social responsibility. I played varsity soccer, participated in twelve clubs, and served as a proctor in Johnson. This is where I learned to manage my time and dedicate my energy to things that matter: school, family, and friends.”

Choi flew across country in late February to deliver a chapel talk, wanting to share his message with students and the faculty who had shaped his two years. “I received so much genuine love from people here, and someday I hope to be a trustee so I can give back what I received.”