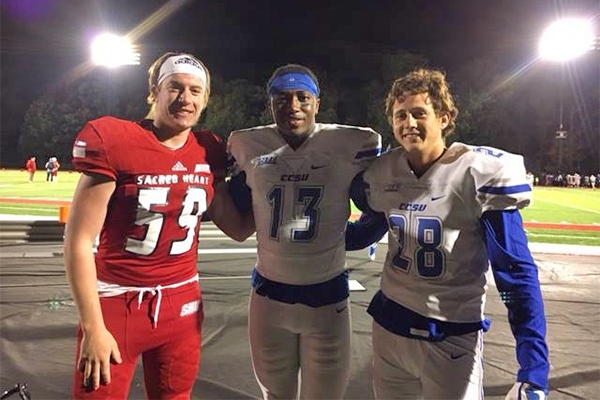 On a chilly Saturday evening in September, the Central Connecticut State University Blue Devils played at Sacred Heart University against the Pioneers. On the sidelines were three familiar Trinity-Pawling faces—but this time, on opposite sides of the field. Najae Brown ’13 and Frankie Palmer ’14 took the field for the Blue Devils and Kenny McDougal ’17 for the Pioneers. For McDougal and Palmer, it was the first time they had been on the same football field since the fall of 2013.

“It was a surreal feeling walking out during warm-ups and running into Frankie and Najae,” McDougal shared. “Eighteen months ago, I would have never imagined playing college football, especially at Division 1. As I told Frank when we crossed paths at midfield, about two hours before kickoff, “Who would have ever imagined this? This is awesome.””

For Palmer and Brown, the mini Trinity-Pawling football reunion was equally exciting. “It’s not often you get to play against a high school teammate,” Palmer shared. “It’s like seeing your long lost brother with a different family.”

Palmer and Brown have played at CCSU together for three years and are grateful for their shared Trinity-Pawling experiences. “I was excited to have Najae as a Blue Devil; I felt relieved having an old teammate endure the same process as me,” Palmer explained, thinking back to his first year on the team. “Najae has been a humble leader and is an outstanding asset on the field.”

Though they have moved on from the Pride, the boys came away with an immense appreciation for the trust, camaraderie, and respect they experienced in the Trinity-Pawling brotherhood—and continue to carry into their new brotherhoods at Sacred Heart and CCSU. “The T-P brotherhood taught me most about forming bonds with my teammates,” McDougal explained. “I learned that it’s okay to put yourself out there and trust your teammates.”

Although the Sacred Heart/CCSU game is the first time that McDougal, Palmer, and Brown crossed paths in a while, it certainly won’t be the last. “There is nothing better than keeping in touch with your fellow classmates once you’re out of T-P,” Palmer shared. “It’s always a blast catching up.” The Trinity-Pawling brotherhood lives on.