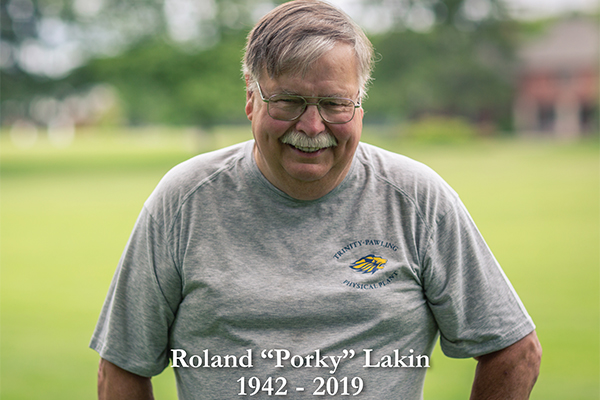 Trinity-Pawling is deeply saddened by the passing of Roland “Porky” Lakin, who was a steadfast member of our community for over 50 years. We are so grateful for his long standing service to the School. Porky was beloved by faculty, staff, and students and he will be dearly missed. Our deepest sympathies go out to Porky’s family and friends.

In Porky’s memory, we are republishing this article by Maria Buteux Reade from the Fall 2018 issue of Trinity-Pawling Magazine:

Roland “Porky” Lakin joined the Trinity-Pawling maintenance crew on January 2, 1967. Snow was already waist high so the 22-year old had his work cut out for him from the moment he arrived. And he kept working hard for the next 50 years.

“My father-in-law was working in the kitchen in the basement of Cluett (the dining hall was in Cluett north end at the time) and he said a job had opened in maintenance. I had spent five years on the crew at Hotchkiss and was working on a farm in Connecticut at the time. So I interviewed with Mr. Dunbar. A couple days later, I met with Mr. Dann. Once he heard I had been at Hotchkiss and then on the farm, he said ‘That’s good enough for me – I can tell you’re a hard worker.’”

Later that first winter, Rudy Helbeck was running the Zamboni and between periods of a game, he got the tip of his finger cut off as he cleaned the machine. “Someone from maintenance called me back to campus and said, ‘Roland, jump on.’ It was my first time on that Zamboni, and one of my buddies said I looked like Ricochet Rabbit out there on the ice.” A week later, Rudy turned the Zamboni over to Lakin who operated it for the next half century. “We patched it together over the years but we’re still only on our second machine.”

Plowing, shoveling, running the Zamboni. Carpentry, plumbing, boiler and water main breaks, emergency repairs, power outages, snow and wind storms – Lakin has helped with all. “In the October 1987 ice storm, I was the only maintenance person here so I put the plow on the truck and pushed the limbs and trees off the campus roads and paths so the kids could get around.” He was also present when the Cluett fire occurred in February 1969. “I was in the library trying to stem the water flow while the boys emptied all the books from the shelves and ran them over to Barstow. Thanks to the kids, we didn’t lose a single book.”

And 150 acres means no shortage of grass. “Come high summer, I would start mowing on Monday morning and work my way across campus all week. The following Monday, I would start right back where I began.”

Lakin enjoyed watching the antics of the students as they grew up (or didn’t…), and he loved seeing many return later as faculty members or trustees. He’s also proud of how the campus has evolved over five decades. “When I started, there were very few trees and no plantings. Now the campus has really nice gardens and everything is so well tended.”

Lakin has served under all four headmasters: Matt Dann, Phil Smith, Arch Smith, and Bill Taylor, and physical plant directors Mike O’Rourke, Ed Hauser and Andy Baker ’00. “I gave what I could to the School, and they always took care of me in return. Trinity-Pawling was a great place to work.”

Well done, good and faithful servant. Thank you for being a steadfast member of our community for 50 years.