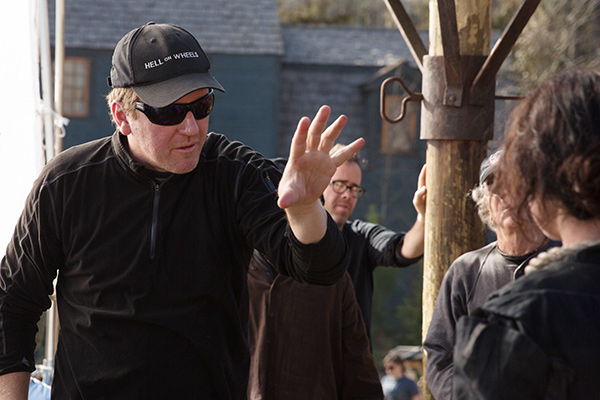 Over the last fifteen years, David Von Ancken ’83 has written, produced or directed television shows ranging from HBO’s critically-acclaimed prison drama Oz to Gossip Girl and CSI:NY to AMC’s Hell on Wheels and most recently Salem on WGN America. In his former life, Von Ancken was a successful New York consultant who spent all his free time “in the public library reading room writing plays and reading stuff.” Eventually one of his short films caught the eye of an agent, a manager, and a producer in California who gave him his first television directing job. “I came out here with a carry-on,” he says from L.A., where he now lives, “and didn’t go home for a year.”

Von Ancken may not have been able to predict his career path when he was in high school, but looking back, he can clearly see some of its roots at Trinity-Pawling. “In the photography club I discovered the whole notion of expressing yourself with a camera,” he remembers. “And Livingston Cole, who ran the outing club, was a great influence on me in terms of getting out and seeing the world.” For someone who, as he puts it, didn’t necessarily come from “the culture of making your way in the world through pure creativity,” those experiences were key and continue to propel him forward. Von Ancken is currently in Morocco, shooting his latest television project for Spike TV, a series called “Tut” that fictionalizes the last two years of King Tut’s reign starring Ben Kingsley. He’s the director and executive producer of the project, which is set to air in the summer of 2015.