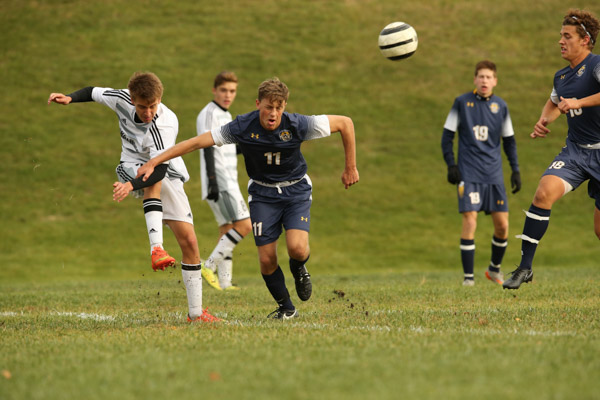 The cleats, nets, and shoulder pads have been stored away, and the Pride has moved inside for the 2015-2016 winter athletic season.

Varsity Cross Country finished in third place at the Annual Founder’s League Championships.  Senior Jordan Harnum finished in 6th place overall to lead the squad, followed closely by fellow senior Jake Hough in 9th and junior Jordi Jefferson in 12th.  All three Pride athletes were recognized as members of the All Founders League Team.  Seven days later, the team continued their momentum with a 5th place finish at the New England’s Championships.  Hough and Harnum would finish 11th and 12th respectively and would both earn All New England Honors.

The Varsity Football team also finished in fine form with a 20-14 victory at Kent on to conclude the season with a 5-3 overall record.  Re’Mahn Davis ’18 had his best game of the season with a rushing touchdown early in the contest, followed by a kick-return touchdown later in the second half.  With the game still up for grabs late in the fourth quarter, Pride quarterback Brandon Harris ’17 found Christian Layne ’17 on a 31-yard pass to seal the victory.  Kent’s offense was denied for the majority of the contest thanks to the excellent defensive play of Pat Marks ’16, Henry Fracasso ’16 and Jake Conlan ’19.

The Varsity Soccer team defeated Salisbury 2-1 in the next to last game of the season, before falling to Canterbury in the finale.  Against Salisbury, Joe Webber ’18 scored 20 minutes into the game to give the Pride the lead.  Late in the second half with the score tied, Miles Martin ’16 crossed the ball into the middle where Frank Lugossy ’16 was able to head the ball into the upper-left corner for the game-winning goal.  Martin and Lugossy were also selected to play in the New England All Star game in late November.

To begin the winter athletics season, the Varsity Wrestling team finished second out of seventeen teams at the Canterbury Tournament.  David Bancroft ’19, Jeff Thompson ’17, and Khaleed Exum-Strong ’16 each won their individual weight classes.  All three Pride wrestlers pinned three opponents on their way to first place.  Zack Conlan ’19 won three matches and finished in second place, falling one takedown short of the championship.  Placing third in their respective weight classes were Jake Conlan ’19 and Pat Marks ’16, while Avery Johnson ’17 placed fourth with two pins on the day.

Varsity Basketball suffered two hard-fought losses to Hotchkiss and Gunnery to open the season.  The Pride were led by Monte Lambert ’16, who finished with double digit scoring in both games, and Jonathan Girard ’17 who managed a double-double against Hotchkiss.

Varsity Hockey lost their first game of the season to Loomis Chaffee 5-4 in an extremely exciting game.  The Pride outshot the Pelicans 44-22, but could not manage to capitalize on as many opportunities.  Ryan Deering ’16 scored two goals in the contest, with Jon Litschler ’16 dishing out both assists.  Defensemen, Chris Taylor ’17 and forward Chris Connolly ’17 each added a goal as well in the contest.

The Varsity Squash team finished 5th out of 7 teams at the Annual Hopkins Tournament on December 5th.  Abdalah Bekhiet ’18 led the Pride from the #1 varsity spot and won two matches on the day.  Hunter Olstein ’17 also had a successful day with two more wins for the varsity.

The Varsity Skiing team is in training, but has yet to compete due to lack of snowy weather.  The first competition for the squad will be January 13th at the Butternut Ski Area.