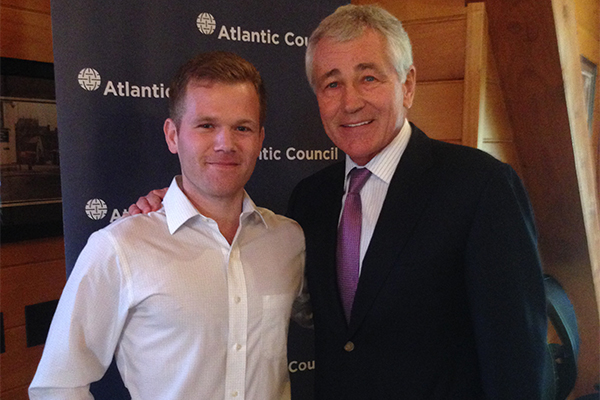 Charlie Cook ’08 always wanted to serve in the military and applied to Officer Candidate School while a junior at Rollins College. However, a severe concussion sustained during a lacrosse game knocked him out of contention. Cook was devastated but his determination to serve his country never waned.

Post-graduation, he spent a year and a half with a logistics firm in Chicago, which he ultimately decided was not his passion. He left that job and volunteered with a children’s hospital and trauma center in south Chicago. Assisting the injured patients, he began to realize his calling.

“I networked like crazy,” Cook said, “and someone put me in touch with the Bob Woodruff Foundation.” In 2006, Woodruff had just been named co-anchor of ABC’s World News Tonight. On assignment in Iraq, he was hit by a roadside bomb nearly killing him. Though unconscious for 36 days, the anchorman credits his survival to the excellent military medical care he received.

“The foundation invests in non profit organizations that support post-9/11 wounded, ill and injured service members, veterans, their families, and the communities, caregivers, and care providers who support them” Cook explained. “Not surprisingly, they wanted someone with a military connection or experience working with veterans, but I illustrated the benefit of having an outside perspective.” Cook landed the job and moved to New York in January 2015.

“The past 14 months have been a whirlwind of travel and insane hours but I have never met so many inspirational people. I have the opportunity to meet severely wounded service members and veterans, and I’m continually amazed at their humility and resolve. Even after complex and horrific experiences, they continue to push forward. This personal contact allows me to see how our foundation can change and improve their lives.”

Cook serves as the Charitable Investments Program Officer, helping decide which veteran service organizations will receive investments. “We specifically support programs that focus on education and employment; quality of life; and rehabilitation and recovery.”

Cook believes that Trinity-Pawling taught him about loyalty and giving back. “The faculty stuck with me even when I pushed against the rules, and the camaraderie on teams and across campus helped me to focus less on myself and more on others.”

Cook continued, “The brotherhood doesn’t stop at graduation. Now it’s my turn to give back to the School.” Cook plans on volunteering his time with Coach Nic Bell’s lacrosse team this spring and he hopes to mentor some students.

Sounds like Charlie Cook has found ways to serve after all.