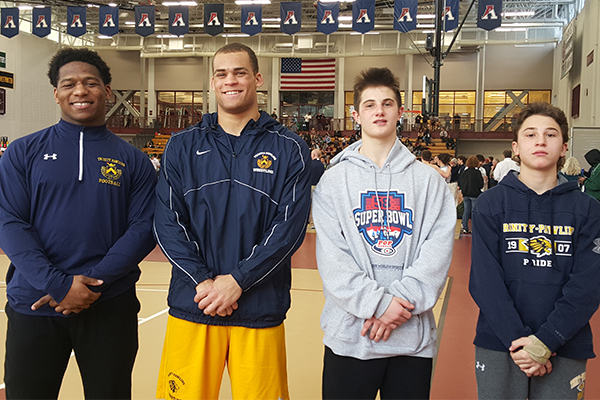 This winter while captaining a successful wrestling team, Jeff Thompson ‘17 decided to parlay the team’s success on the mats to success in the fight against cancer. He devised a plan.

“Wrestling is both an individual and team sport,” Thompson explains. “I decided to take advantage of our parents’ understandable pride in our team’s success as well as our individual success. I came up with a plan. I asked each parent to donate ten cents to Relay for Life for each point our team scores in our three end of year tournaments. I then invited them to donate an additional $1 for every point their son scores.” The team participates in a regional, New England and National tournaments.

“We did really well at our regional tournament almost scoring 200 points which translated into almost $650 pledged to Relay for Life. We then did pretty well at the New England’s scoring over 100 points generating another $300. Hoping to score some more at the nationals!”

Thompson and four others reached the finals of the regional tournament with four emerging as champions. “I feel sorry for the Conlan family. They agreed to this fund raiser and both Zach and Jake won,” Jeff says with a laugh. “We have a great group of guys as well as parents. Thanks Conlans!” Senior Khaleed Exum-Strong won and senior Patrick Marks came in second. The team came in second overall with 192 team points.

The team then headed off to the New England tournament putting four grapplers in the finals and picking up one championship. “It’s great to know that all our hard work on the mats actually will help a worthy cause,” Jeff says. “I challenge all the spring teams to do something similar and help us all fight cancer.”

The five wrestlers who went to the nationals scored 16 team points highlighted by Khaleed becoming an All-American. “The wrestling at the nationals was pretty intense,” Thompson commented. “I wish we could have won some more matches to help Relay, but we did the best we could.”