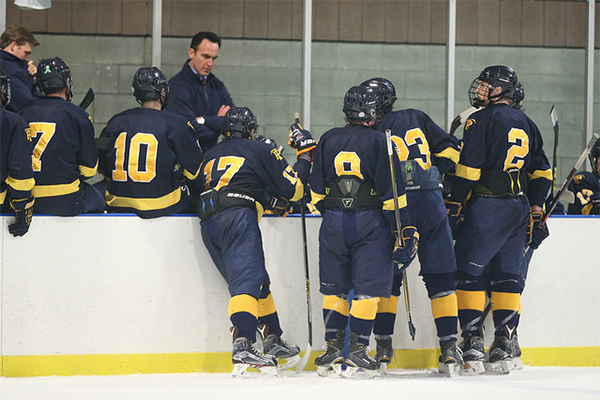 Roll up the mats, cover the ice, and take down the hoops because it’s time to move into the spring sports season. That’s right! Dress warmly; the boys are now heading to the newly thawed fields across Route 22.

To conclude the winter season, the wrestling team made their way to the Western New England Tournament, where nine Pride athletes placed and the team finished 2nd out of 16 teams. Four wrestlers walked away with the gold, including freshman brothers Zack and Jake Conlan, junior Jeff Thompson and PG Khaleed Exum-Strong.

The following weekend at the New England Championships, four Pride boys made the finals and the team placed 5th out of 45 total teams. Freshman Dave Bancroft and Zack Conlan along with Jeff Thompson walked away with the silver medal, while Khaleed Exum-Strong remained undefeated on the season with an 8-1 decision in the finals to claim the top spot on the podium.

The four New England finalists along with senior Pat Marks all qualified to wrestle at the National Preps this past weekend at Lehigh University. All five wrestled tough, but Exum-Strong highlighted the tournament with a 6th place finish, becoming the first Trinity Pawling All-American wrestler since 2013.

The wrestling team finished 16-3 this year, easily won the Founder’s League Championship, and will only lose three seniors off of this year’s team. The future looks bright for T-P wrestling.

Varsity Hockey finished 10-13-1, winning five of their last seven games. In the final game of the season, the consolation game of the Empire Cup, the Pride pulled together and defeated Millbrook 6-3 in exciting fashion.

T-P took an early lead in the contest when Chris Taylor ’17 scored less than two minutes after the opening whistle. Before the first period was over, the Pride had increased the lead to 3-0 off goals from seniors Jon Litscher and Casey Winn.

Millbrook scored twice in the early minutes of the 2nd period; however, on a 4-on-3 power play, Jordi Jefferson ’17 would score the game-winning goal off a pass from freshman Joey Musa. Coach Ferraris, in reference to the goal said, “We have never found ourselves in a 4-on-3 situation, so I called the kids over and sketched out a play they had never seen before. They went out there, executed it perfectly and fifteen seconds later the puck was in the back of Millbrook’s net. The whole team and myself just started laughing.” Jordi Jefferson would add another goal in the third period along with the sixth and final goal by senior Tyler Gwyn.

Varsity Skiing ended on a high note when freshman Tommy Poulin became the first T-P athlete to ever win the NEPSAC Class B Championships in the Giant Slalom. Poulin was in fourth place after the first run at Crotched Mountain, but in the second and final run of the day, Tommy beat every other competitor by two seconds to take home the gold medal. Eighth grader, Cannon Barnaby finished 16th in the event and Ben Verdesi ’18 ended in 30th place. The entire team is underclassman and will return next season.

Varsity Squash had a rebuilding year after losing seven starters from last year’s team. The Pride finished 4-11 on the season with two exciting victories over Canterbury and a solid performance at the Interscholastic Class B Tournament at Choate this past weekend.

Seniors Nick Sweet, Zev Sonkin and Brad Kim competed hard all year and will be missed in the future by the team and the coaches.

Varsity Basketball finished strong with five wins out of their last six games, highlighted by a 74-71 victory over Canterbury in mid-February.

With the scored tied in the final seconds, when overtime looked inevitable, captain Stephen O’Hanlon ’16 hit a three-pointer at the buzzer to seal the game for the Pride. O’Hanlon finished with 17 points in the game, Jordan Harnum ’16 added 19 points, and Jonathan Girard ’17 led the team with 20 points of his own.

JV Basketball finished 12-5 on the season including a six-game winning streak to end the season. Ricky Norris ’17 led the team with an average of over 15 points per game, while senior Tanner Baldin and freshman Will Rickert consistently scored in the double digits. Finally, 3rd’s Basketball ended 12-2 with dominating wins over almost any team they faced.