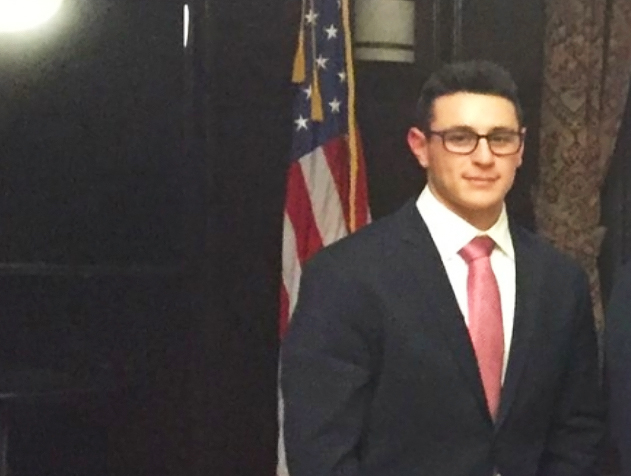 “I sometimes argue just for the sake of arguing!” Anyone who knows Alex Lowell ’10 would not be surprised to hear that statement. “I’ve always had strong opinions and felt compelled to defend them.” While he acknowledges that he probably drove half the faculty and his peers crazy, those same people will be pleased to know that Lowell’s prowess at sophisticated argumentation steered him to law school.

I R A C. Issue, rules, analysis, conclusion. “That approach is how I operate and informs all my decisions,” said Lowell. After graduating from University of Maryland at College Park in 2014, Lowell began law school at Pace University. In his first year, he discovered he loved contract law which led him to pursue a concentration in intellectual property, specifically in the music and entertainment industry. While at Pace, Lowell has interned in the legal departments at Atlantic Records, Viacom, and William Morris Endeavor, an international talent agency. He landed another position at a sports marketing agency this summer.

Earlier this year, Lowell won the Grand Moot Court Competition, a grueling judicial law debate. “It’s essentially a mock Supreme Court, where law students prepare their briefs and argue their case in front of five federal judges who grill us. No matter how well you have prepared, you never know where the judges will take their questioning. It’s all about being able to think on your feet.”

Although the court room was filled with 500 spectators, Lowell felt at ease. “I’ve always been persistent and never back down from a challenge, but T-P helped me find my voice and develop my confidence. I was a captain of wrestling, sports editor of The Phoenix, and took public speaking. Even now, whether it’s grades, or winning a court competition, or pursuing a job I want, I have the confidence to pursue it, knowing that if I put in the effort, the desired result will follow.” Next fall, Lowell will represent Pace in a competitive field of 140 other law schools at the nationals.

Lowell will graduate from Pace in 2017 and envisions a career that incorporates intellectual property rights in the sports, music, and entertainment industry. Whether drafting contracts, negotiating disputes, or investigating copyright and trademark violations, you can be sure that Lowell will be exquisitely prepared and eager to argue on behalf of his clients. Congrats to Alex, and good luck at the national competition next fall!