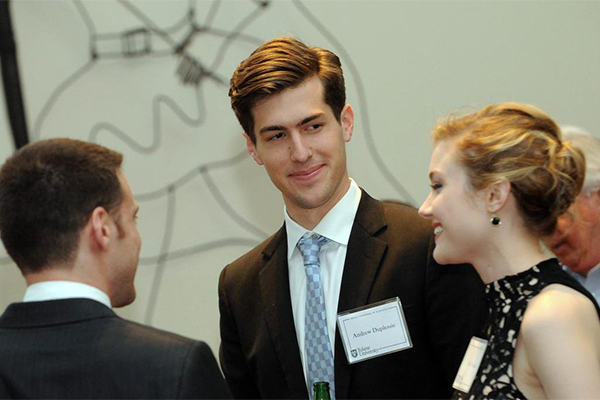 Imagine a Trinity-Pawling brother advising teenage girls about outfits, makeup, and shopping? That’s exactly what Andrew Duplessie ’11 has done with his Tipster app, launched in July 2016. After graduating from Tulane as a finance and math major he turned away from hedge funds and moved to Silicon Valley. There on the West Coast he set about creating Tipster, an app that provides on-demand style advice to teenage girls. “Girls can go to the mall and video chat with a stylist who provides on-site advice about clothes. We also offer makeup tutorial videos which are hugely popular,” Duplessie explained. Tipster now has more than 100,000 followers on Instagram.

Duplessie designed the screen and graphics, a creative team in L.A. manages the 600-plus stylists and outreach, and developers in New York handle the tech end. “I didn’t think I’d find myself in the fashion world but I’m learning about design and tech,” he noted.

While at Tulane, Duplessie worked on movie sets in New Orleans, first as an extra then landing a few speaking roles. “I saw that stylists had a lot of free time, and this app allows them to monetize their free time and talent.”

However, when applying for finance jobs, most firms didn’t appreciate his film background whereas Silicon Valley embraced Duplessie’s well-rounded experience. Duplessie firmly believes that diversifying himself allowed him to take the risk and pursue more creative opportunities in the tech world. He’s currently involved in building an Escape Room in Los Angeles, an interactive puzzle where visitors engage in a mix of analytical and physical challenges to escape a locked room.

Duplessie credits Trinity-Pawling’s incentivized effort system as vital to his work ethic, and living in dorms taught him to value honest communication. “Everyone had to be transparent since we all lived together 24/7. I run my business with that same sense of openness I experienced at T-P.” Diligence, transparency, and creativity – tickets to Duplessie’s success as a fashionista.