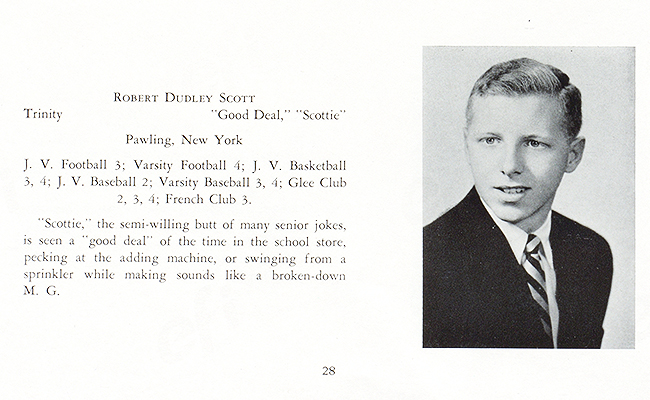 “I feel incredibly lucky. Mr. Dann plucked me from an orphanage in Millbrook, New York in 1951 and brought me to Trinity-Pawling. Next thing I knew, I was walking up the front steps of Cluett into a place where everyone wore coats and ties. I was in total awe.”

Since Scott had arrived mid-year, he spent that first year living in the third floor of the headmaster’s house. Prior to the orphanage, Scott had been living in New York City with his grandmother. “I suspect my grandmother must have known Mr. Dann from New York. Quite honestly, I never had the foggiest idea how I came to land at T-P, but Mr. Dann became my legal guardian and the School saved my life.”

Scott made Trinity-Pawling his home for those three years and lived on campus during the summers. “I drove the tractors, cut the grass, did maintenance work inside and out for those summers. I actually loved it.”

Matt Dann was still running both his school in Pawling as well as Trinity School in Manhattan, and Bob Scott served as one of the students who regularly drove the headmaster between the two schools. “Mr. Dann spent the bulk of his time at T-P but still had obligations in New York. We would leave Pawling early in the morning, I would drive him into the city, and we would return home that evening. I suppose I must have missed classes sometimes but I got to know Trinity School quite well.”

Scott reflects on his years in Pawling. “Mr. Tirrell, Mr. Dunbar, Mr. Riddleberger, Mr. Emerson, Mr. Weber, Mr. Darling – these men provided me with a first class education. They also taught me how to comport myself, to keep my mouth under control, to dress properly.”

After graduating in 1954, Scott spent two years at Trinity College and played for two seasons on the Bantams’ back-to-back undefeated football teams. He graduated from the University of Richmond in 1959 and entered the Marine Corps. “I was a pretty good shot so they made me a rifle trainer. I am fortunate that I never had to fire a shot in anger nor see Vietnam.”

Scott spent his career in pharmaceutical sales based in North Carolina and Virginia. He now resides in the Shenandoah Valley where he lives with Tomlin, his wife of 16 years, who worked in financial aid at Mary Baldwin College. Scott’s three children and six grandkids live in the Richmond area. “At eight-oh, I maintain that keeping active is the only way to go. Life’s too short to sit around and do nothing.”

Though Scott wishes he could return to campus more frequently, he has remained a steadfast monthly supporter of the Trinity-Pawling Fund. “I did make it back for my 60th reunion in 2014 and had a marvelous time. A prefect toured me and I couldn’t get over how the School has evolved! I picked up a T-P hat and sweater and they’re now part of my wardrobe. I’m eternally grateful for Trinity-Pawling.”

Advice for current students? “Appreciate what you have.” And for fellow alumni? “Never forget those who labored to make you a better person.”