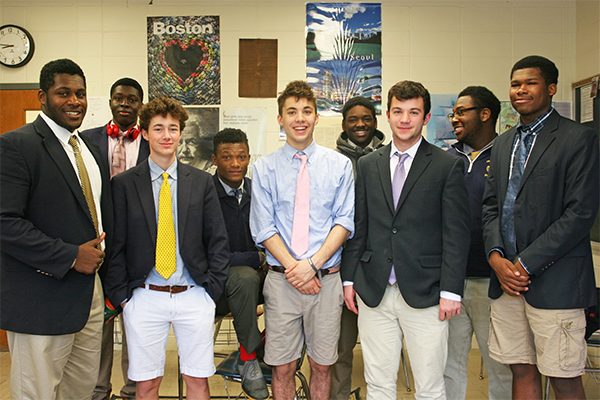 Frank Fritts has taken steps to incorporate Trinity-Pawling’s community theme “Engaging the World” into the curriculum of his World Geography class in the form of service learning. “I wanted the students not just to study the complexity of the world but to do something to make the world a better place,” Mr. Fritts explains. The project Mr. Fritts formulated involved the students taking part in a Shark Tank-like competition to pick an organization that would help children somewhere in the world. It was then up to students to find ways to raise money for that organization and to inform the community about it.

The faculty judges, or sharks, chose the student group that proposed the Stephanie Crispinelli Humanitarian Fund, a foundation that raises money to build schools in Jamaica and Haiti. With it being an organization on the smaller size, the sharks felt that students could make the most impact with their efforts, and it also holds a special Trinity-Pawling connection. The brother of the person for whom the organization is named is an alumnus of Trinity-Pawling. Stephanie Crispinelli, sister of Nick Crispinelli ’09, tragically lost her life in the events of the 2010 Haiti Earthquake.

Jesse Ballard ’17 (shown center) personally knew Stephanie and her family and proposed this foundation to his group. “When the earthquake in Haiti happened and I knew Stephanie was there, it had a huge impact on our family and our whole neighborhood and community,” says Ballard. “Any money we raise will go towards building the seventh Steph’s School, which is the title given to the schools which are named after her.”

The fundraising event that Jesse and his classmates organized is a dance for students of Trinity-Pawling and other invited schools called the Blue & Gold Ball, to be held in Scully Hall on May 6th. The money collected at the door will go entirely to the Stephanie Crispinelli Humanitarian Fund. T-shirts and wristbands will be sold to raise money and awareness for the cause as well.