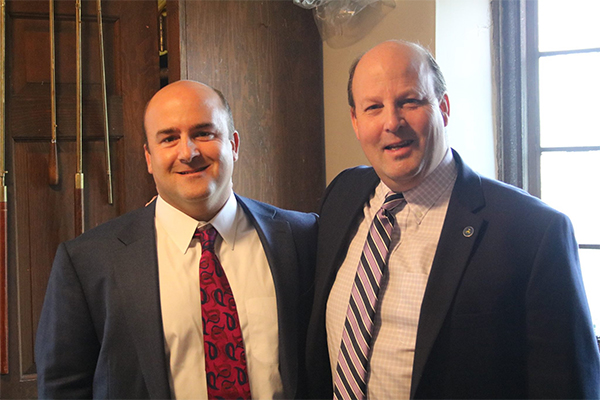 Joe Alex ’96 returned to campus on a chilly November morning to give a Chapel Talk about what he feels is the most valuable takeaway from Trinity-Pawling: the concept of brotherhood. As a graduate of the Class of 1996, Alex spoke to the current students about the bond they will always share with one another—and the bonds they will form in the future. “You may not realize its significance right now,” Alex shared in his Chapel Talk. “But once you’re out, you quickly learn how lucky you were to be in the brotherhood.”

After graduating from Trinity-Pawling, Alex attended Adelphi University in Garden City, New York, where he studied Sports Management. He ambitiously entered the sports entertainment world, landing a variety of jobs, including working for the Olympics in Salt Lake City, the U.S. Open, and a sports radio station in Boston. The value of camaraderie that Alex experienced at Trinity-Pawling stuck with him through it all.

It was this concept of camaraderie, in fact, that led Alex to his drastic career change. In 2006, Alex left the world of sports entertainment and joined the family business, American Maintenance. “I saw the camaraderie that my dad had with my brother and I really missed it,” Alex shared. “That’s when I realized I wanted to be a part of it.”

American Maintenance is a full-service facility company, started by Alex’s father 44 years ago. Now as the company’s Vice President, Alex is grateful for his experiences in the Trinity-Pawling brotherhood that he continues to apply in his daily work. “T-P taught me structure and how to be resilient,” Alex explained. “But most importantly, it taught me about relationships. I learned how to socialize with more than just my peers. We lived with our teachers, ate dinner with our Headmaster—we had to know how to talk to them. I learned how to build relationships and communicate at Trinity-Pawling, which is so crucial in business.”

Alex stressed this importance of relationships in his Chapel Talk and he is hoping it resonates with the boys as they continue their time at the School. “Four years in the brotherhood go by quick,” he stated. “Soak it up, because there’s absolutely nothing like it.”