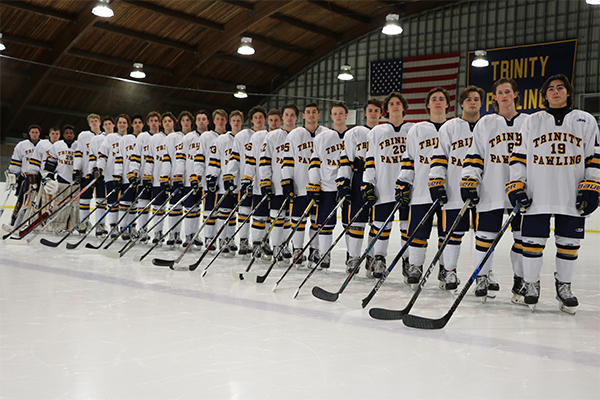 The varsity hockey team won the Founders League for the first time in School history with a record of 5-0-2. They continue to play in their quest for a bid to the New England tournament.

In the same week, the wrestling team won their fourth consecutive Founders League Championship. This past weekend, the team traveled to Taft for the Western New England tournament and finished second to Brunswick School. Dave Bancroft ’19, Bim Gecaj ’18, Graham Roediger ’18, and  Jake Conlan ’19 were champions in their respective weight classes.

The ski team continues to make progress as each boy improves on a daily basis. Newcomer Griffin Fluehr ’20 has been the most consistent skiier.

The varsity squash team has battled injuries all year long, which has forced players to move up the ladder and play against internationally ranked players.

The 3rd basketball team remains undefeated with contributions from the entire squad.

In addition to our live coverage of Trinity-Pawling hockey games on YouTube Live, we are pleased to announce that Trinity-Pawling basketball games and squash matches will now be streamed LIVE on the Trinity-Pawling website using our new PlaySight technology.