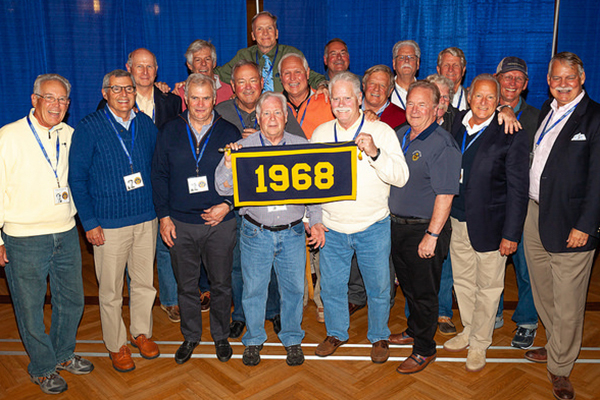 Over 200 alumni, parents, and friends were welcomed to campus on September 28 and 29 for Homecoming and Reunion Weekend. We celebrated our alumni, enjoyed good food, and watched the Trinity-Pawling football team beat Loomis! Classes from 1948-2018 were represented and many people traveled thousands of miles to be on campus for the 2018 Reunion Weekend festivities, including the gentlemen from the Class of 1968, who were celebrating their milestone 50th reunion!

Highlights of the weekend included the Distinguished Alumni Award ceremony and the Athletic Hall of Fame Induction. The Distinguished Alumni Award was developed to recognize an alumnus’ outstanding lifetime service to Trinity-Pawling School. Recipients of the award are members of the alumni community who have an established record of service to the School, and have demonstrated significant achievement in his or her profession. This is the highest award presented by the Alumni Association. This year’s Distinguished Alumni Award was presented to Paul Miller ’63, P’92 and Joseph Callo ’48. We are tremendously thankful to these outstanding men for their commitment to Trinity-Pawling School.

The Athletic Hall of Fame was established in 1998 to honor former teams, student-athletes, and coaches who have reflected honor upon Trinity-Pawling by virtue of their outstanding performance and exemplary contributions to their alma mater, community, and profession, and in doing so, reflect the philosophy of a college preparatory education and the ideals of sportsmanship. Congratulations to the Trinity-Pawling Athletic Hall of Fame 2018 inductees William A. Cooper P’75, ’79, C. Stephen Harrington ’68, and the 1976-1977 soccer team.

Another high point of the weekend: the entire student body gathered in Gardiner Theater to listen to a group of esteemed alumni in a candid panel discussion about their Trinity-Pawling experiences. Watch the full discussion, moderated by Eric Drath ’88, which included Paul Miller ’63, Peter Boggs ’68, Mark Horncastle ’88, Chris Cattani ’93, and Headmaster Bill Taylor.

Check out the Homecoming & Reunion photo gallery to see pictures of the weekend events.