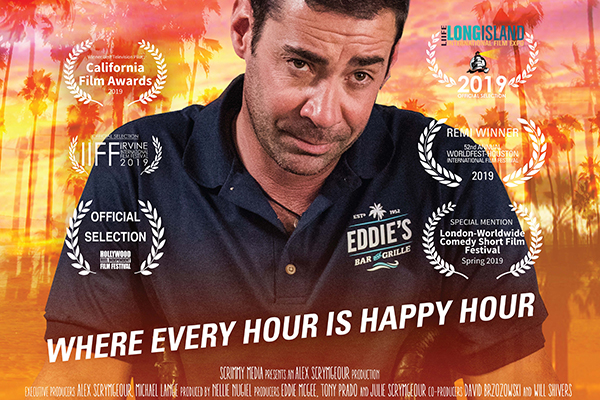 This past year saw tremendous success for my dramedy TV pilot Eddie’s, which I created, wrote, and executive produced, starring Eddie McGee and George Wendt. Eddie’s was in five festivals from here to Europe, including Los Angeles, New York City, Houston, and Madrid, where it garnered four nominations for best pilot and three wins.

A recent CDC study showed one in four adults has a disability, making over 25% of the population the most underrepresented minority community in TV and film. Eddie McGee as producer and star, having lost his leg to cancer at age 11, gives voice to over 25% of the population who have no strong presence on TV or in film. As for all the talk of diversity in Hollywood, there is not a lot of discussion regarding diversity and disability of actors and producers. Information and trailers on the show can be found at www.facebook.com/eddiestvshow.

I also am pleased to note that the pilot for the pizza travel show I created, wrote, and executive produced, Pizza Perfect, is now streaming on Amazon Prime. In the pilot, Pizza Perfect traveled to Rome, Italy. Exploring the Eternal City and meeting local pizza masters, Pizza Perfect shows different types of pizzas from different regions in Italy and some of the vibrant visual history from the area. I also met local buffalo mozzarella cheesemakers and learned to make authentic Roman pizza!

For 2020, I am working on my next film project, Kill Switch, starring Eddie McGee and my next crime drama TV show Santa Monica Knights. Kill Switch has an amazing script and I am currently looking for investors to continue making award-winning content that engages and entertains.