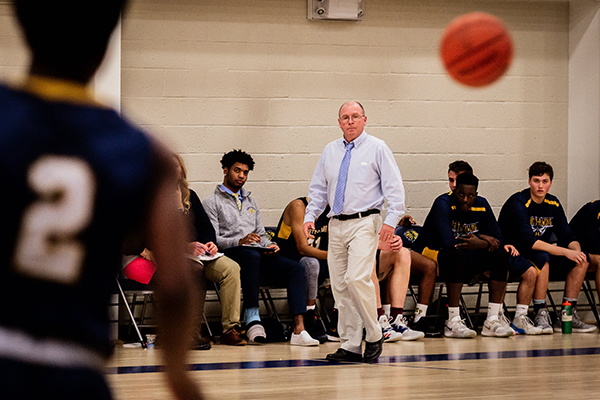 Long-time faculty member Bill Casson has announced his retirement — he’ll be heading to Florida following 20 years of coaching and serving in the Office of Admissions. While it’s bittersweet news, we’d like to celebrate all that Bill has done for Trinity-Pawling over the years!

Bill is in his 20th year at Trinity-Pawling as Associate Director of Admissions and Head Coach for varsity basketball. He left the School in 2006 to work as Athletic Director and Head Basketball Coach at St. John’s Country Day School in Orange Park, Florida and he returned in 2010. In his first Trinity-Pawling tour from 2001-2006, Bill worked in admissions and coached varsity basketball. During that time, the varsity basketball team was named Tri-State League Champions for five years, Founders League Champions for five years, and New England Class B runner-ups in 2003. After Bill returned, he also guided the basketball program to two Tri-State League Championships and a Founders League Championship in 2015, while qualifying for the NEPSAC Class A Tournament eight times in the past eleven years. In 2014, Bill was honored to receive the NEPSAC Coach of the Year Award.

During Bill’s dedicated career, he has been a head coach at the high school level for 40 years, with an estimated 500 wins! He has also helped to place over 130 basketball players in colleges all over the country. As the Associate Director of Admissions, Bill interviews prospective families, travels to meet with educational consultants, and visits lower schools throughout the country and overseas.

He and his wife, Kathy plan to retire to Fort Myers, Florida with their loyal Labrador, Barkley.

We extend a heartfelt thank you to Bill Casson for his contributions to the life and success of Trinity-Pawling School. While we still have a few months to celebrate all that Bill and Kathy have done for the School, we take this opportunity to focus our collective attention on Bill’s stellar career and to say THANK YOU!

Did you know that you too can applaud Bill Casson’s hard work, commitment, and impact on Trinity-Pawling (and on you!) by making a gift in his honor? Visit our giving page and make a note that your gift is “In Honor Of” Bill Casson.