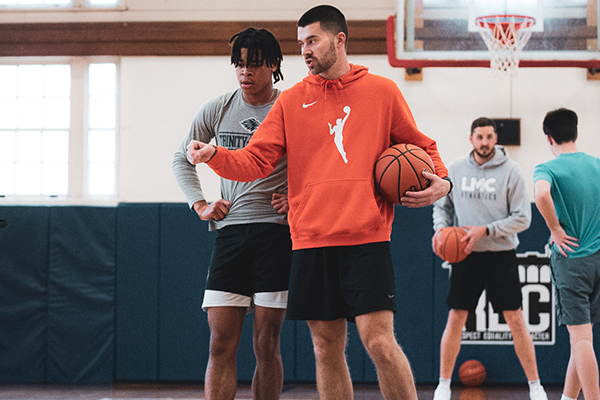 The story begins before Justin Cooper ’14 even arrived at Trinity-Pawling in the fall of 2013. When childhood friend and Pine Plains High School teammate Tyler Lydon headed to another notable basketball prep school, Cooper realized that the opportunity to play at the NEPSAC level would help extend his own basketball career. Just an hour down Route 22, Cooper found his way to Trinity-Pawling and onto Coach Casson’s team as a PG. “It was a good experience to play NEPSAC — the level of play top to bottom is so different,” he remarked. “Everything outside of basketball at T-P prepares you: academics, eating correctly, being in the weight room, and learning how to handle being away from home.” During the winter of 2014, Cooper proved he belonged by leading the team to a Founder’s League Championship and was then recruited to play at SUNY Cortland.

With great success for three years in the SUNYAC and a budding experience as a summer AAU coach for youth programs in Dutchess County, Cooper knew he had what it took to keep sharing his passion for the game. “I thought I was going to be coaching, I didn’t even really know what a trainer was,” he said. That is until he met skills trainer Steve Dagostino at a high school event in 2018. Soon after, Cooper and Lydon — who has since played a few NBA seasons for the Denver Nuggets — officially started their training business, LMC Athletics. This past summer, Cooper had the opportunity to represent LMC and work at an NBA Pre-Draft Camp in Albany through the strong mentorship of “Dags” (Steve Dagostino).

Although COVID-19 was a setback, Cooper adapted to the world of virtual communication by offering ball-handling workouts and clinics on Instagram Live and Zoom to keep his players sharp. Whether in-person or online, he says communication is paramount in the world of sports training. While the budding industry has notable faces around the country, Cooper has begun to make his regional mark, working with many college-level players and even Trinity-Pawling sophomore standout DeAndre Williams ’23. Find LMC Athletics on Instagram at LMC.Athletics and connect with Cooper @justincooper10 on Twitter to hone your basketball skills. Roll Pride!