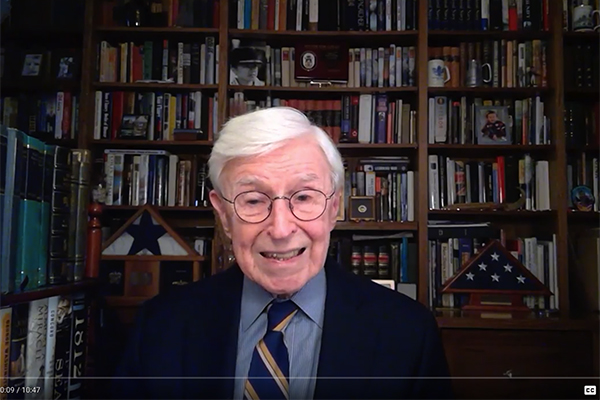 In late February, Louis Inghilterra ’17 was organizing the annual Pig Dinner for his fraternity at Colorado State University at Fort Collins. This traditional formal dinner is well known to members of Phi Gamma Delta, aka Fiji. As the corresponding secretary of the fraternity, Inghilterra needed to find a keynote speaker. While flipping through the Fiji history book, he saw a name he recognized: Joe Callo.

“I had met Joe Callo ’48 at a Trinity-Pawling alumni function in New York City when I was an alumni ambassador,” Inghilterra recalled. “I reached out to Colleen Dealy in the Trinity-Pawling Office of Advancement who connected me with Joe.”

On the evening of May 1, 2021, Callo delivered a remote keynote address to more than 100 Fijis gathered at the Fort Collins Country Club. “Although 1,000 miles apart, we are connected in spirit, thanks to technology,” Callo observed from his apartment in Manhattan. A Phi Gamma Delta at Yale ’52, Joe received the Distinguished Fiji Award in 2010, given by the international fraternity to honor his lifetime of service.

Dressed nattily in a blue blazer and striped tie, the 91-year-old retired U.S. Navy rear admiral, advertising executive, professor, television producer, and author spoke about how we deal with change. He had solicited input from three different perspectives: Admiral Antony Radakin, head of the British Royal Navy; Father Gerald Murray, pastor of a major Catholic parish in midtown Manhattan; and his own daughter, Kathleen Callo, a former journalist with Reuters International News Agency.

In the ten-minute video-recorded address, Callo summarized these individuals’ insights. Admiral Radakin suggested that, “We place too much emphasis on the risks of introducing change and too little emphasis on the risk of carrying on as we are.” Father Murray opined that, “At the root of our search for change for the better is a healthy dissatisfaction with the way things are at present.” And the journalist Kathleen Callo reflected specifically how technology has transformed the way we create, learn, communicate, and view community. She noted that “trying to cope with unrelenting digital change can seem as daunting as leaping onto a moving skateboard, but it’s worth the effort.”

Callo concluded that what matters more than the existence of change is how we react to it, particularly digital technology’s warp-speed evolution. “Change is constant. We need to embrace or accommodate it, but by all means, we need to preserve our psychological balance and maintain perspective in order to avoid being victims of it.”

Callo and his wife of 42 years, Sally McElwreath Callo, a retired Navy Reserve captain, live in Manhattan, where he continues to write while also contemplating what his next career will be. Inghilterra recently completed his junior year at Colorado State where he is studying interior architecture. “My fraternity brothers and I were so appreciative of Joe’s wisdom. A man of his stature heralding and embracing change is a good message for us all.”