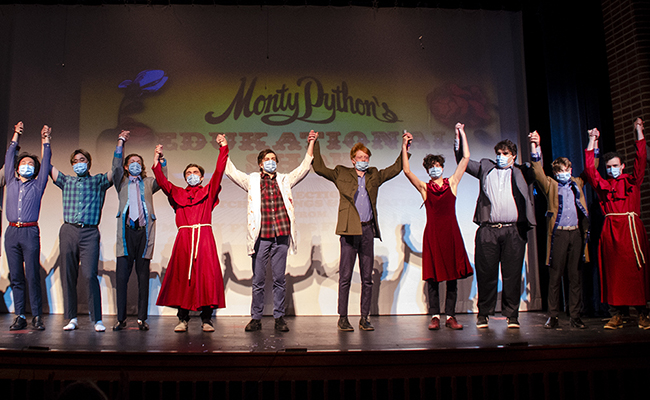 In Theater Director Kent Burnham’s final play at Trinity-Pawling, the series of skits interspersed by music, animation, and shorts from the original Monty Python cast pushed the audience to consider the absurdity of the mundane. A bizarre opening skit capped senior Jackson McAvoy’s wonderful career as a leader on stage, as his character resisted an impulse to use scissors for a more violent purpose than cutting hair. The dreamy, drawn-out opening captured the audience, giving way to belly laughs filling the theater throughout the night.

The Kathleen Claypool Prize for Dramatic Arts winner Kyle Tanner ’21 showcased his humor and command of the British air in a skit where he donned a coat and tie to reminisce with friends about how much worse things were ‘in those days.’ Senior Christian Strader showcased his beautiful voice, belting alongside youngsters Phuc Vu ’22 and Junyoung Park ’22 about the deliciousness of SPAM in their on-stage Trinity-Pawling debut. Max Camaj ’23 and Daniel Lisanti ’22 also made their premiere performances for Trinity-Pawling, establishing a promising future for more laughs and tears in Gardiner Theater.

Assistant Director Joe Osborne ’21 finalized his creative and thoughtful Trinity-Pawling career with the successful show. A special thanks is deserved for Mr. Bresler’s sound and lighting design, and to Mr. Templeton for his musical direction.