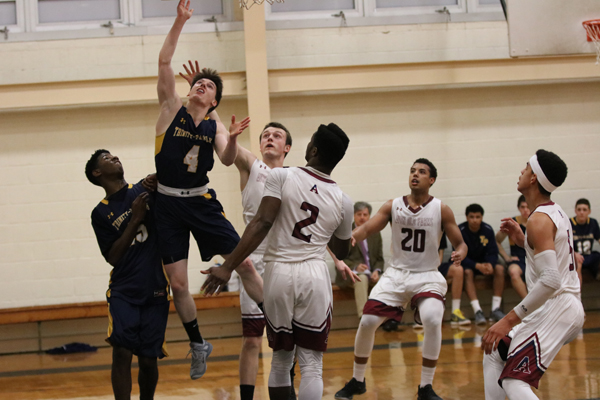 When it’s actually warmer in the Ice Rink than it is outside, you know that you are in the real heart of the winter athletic season.

Continuing its dominance, the Varsity Wrestling team holds a 12-3 record including wins over Taft, Avon, and Loomis.  Most exciting, was a 77-0 romp of the Suffield Tigers at the Carleton Athletic Center, where Dennis Ilmela ’17 concluded the shutout with a cradle to a pin only 30 seconds into the match.

The three captains Khaleed Exum-Strong ’16, Pat Marks ’16 and Jeff Thompson ’17 have been absolute wrecking balls at the upper weight classes for the Pride. The 1-2-3 punch of the grappling trio has resulted in over 50 individual wins and only one loss thus far this season. What is being called “The Murderers’ Row” is an almost guarantee victory for T-P in every single dual meet.

106-Pounder David Bancroft ’19 also has shared in the success with only one loss on the season, while fellow freshman, brothers Jake and Zack Conlan have added quite a spark to the middle-weight classes for the Pride.

Varsity Hockey is 4-9-1 in the first season under new head coach Robert Ferraris. The young Pride team got off to a slow start, but has since come together and are 2-3-1 in the last six games. Junior goalkeeper, Justin Lampert has really begun to find his rhythm between the pipes, fellow junior Ray Zimmerman has taken well to his role as the Pride enforcer, and the rest of the team is beginning to understand the new system.

Hockey defeated Taft 2-1 on Saturday, where Trey Aiello ’16 scored the game-winning goal with 14 seconds to go in the contest. Earlier in January, the Pride journeyed to Deerfield and defeated the Big Green 3-2, with the go-ahead goal coming in the last five minutes by junior Chris Connolly off a rap-around pass from Zimmerman. Aiello and Nick Charron ’17 each also added a goal in the contest, while Lampert finished with 26 saves.

Varsity Squash has began the 2015-16 campaign with a 2-7 record thus far. Abdallah Bekhiet ’18 has shown some tremendous skill at the #1 position for the Pride as only a sophomore, while Nick Sweet ’16 has acted as the senior leader from the #2 position on the team.

In the most exciting match of the season, the Pride were able to defeat the Canterbury Saints 6-1 in a hard-fought battle with strong play from juniors Ty Gundrum and Chris Taylor.

JV Squash is 3-3 on the season with wins over Kent, Salisbury and Canterbury; led by sophomore Nate Tanner and junior Joe Morley.

Varsity Basketball is 1-12 on the season, but has lost two games by only a two-point differential. Monte Lambert ’16 and Jordan Harnum ’16 have been two huge new additions for the Pride.  Lambert with his defensive and ball handling abilities, together with Harnum’s sharpshooting from beyond the arc and his ability to drive down the baseline for the layup. Jonathan Girard ’17 continues to be a powerhouse on the boards, while Stephen O’Hanlon ’16 is a clear leader on and off the court. The Pride concluded a 52-46 victory over Westminster back in December, where Harnum and O’Hanlon led the team with 11 points apiece. Small-forward, Kevin Salis ’17 secured the victory with a couple big shots from distance in the final quarter of play.

JV Basketball is 6-4 on the season with Ricky Norris ’17 continuously scoring in double digits, and Tanner Baldin ’16 leading the team at the point. 3rd’s Basketball is 5-1 thus far, with some dominating performances led by senior Justin So.

The Varsity Ski team, with only a few competitions under its belt, has had some strong performances from freshman Tommy Poulin, and 8th grader Cannon Barnaby.