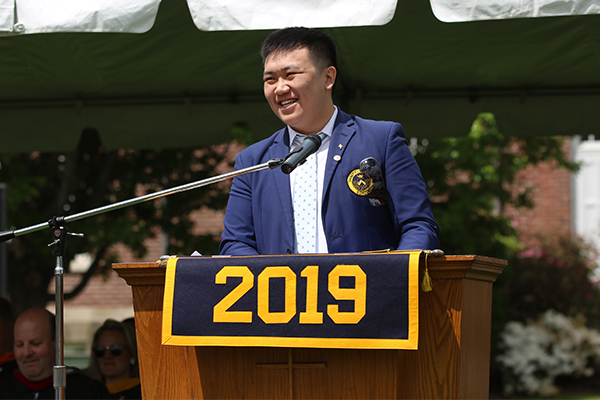 “Right now, I am overwhelmed with mixed, but utterly strong emotions,” began Yin “Leo” Jiang ’19 in his valedictory address at Trinity-Pawling’s 112th Commencement Ceremony. “Nervousness, uncertainty, nostalgia, and yet excitement and optimism all at the same time.”

Honored and humbled to be Valedictorian of the Class of 2019, Jiang expressed gratitude to his classmates for all that they taught him over his years at Trinity-Pawling. From the classrooms to the dorms and everywhere in between, Jiang acknowledged that he learned just as much from his brothers as he did from his teachers.

“As one of the greatest philosophers in China, Confucius, once said: ‘There must be one out of three who can be your teacher.’ I learned from you guys to become a better version of myself, to embrace the idea of brotherhood, and to become a true brother to my younger sibling,” shared Jiang. As he and his fellow graduates leave Trinity-Pawling and embark on their individual journeys, Jiang challenged them to be lifelong learners, change-makers, and friends.

“Class of 2019, I ask you to learn not only from your teachers but also from your peers,” he concluded. “I challenge you to treat everyone you meet in the future as sincerely as you would your brothers here and I charge you to expand your brotherhood until it has no bounds.”

In addition to his Valedictorian honors, Jiang was also presented with the Vocal Music Award, Spanish Award, Outstanding Achievement in the Senior Independent Project, and the Senior Honor Student Award during the Commencement ceremony. In the fall, he will attend the University of California, Los Angeles (UCLA) to study Statistics and Economics.

“It goes without saying that Leo excels in his academic work,” shared Headmaster Taylor. “What needs to be said, however, is the deep impact that his depth of character and caring has had on those fortunate enough to teach him and study alongside him. While he moves on from this relatively small learning community, we know that he will make his mark on the much larger UCLA community and beyond.”

Congratulations, Leo! We are eager to see what you will accomplish next!