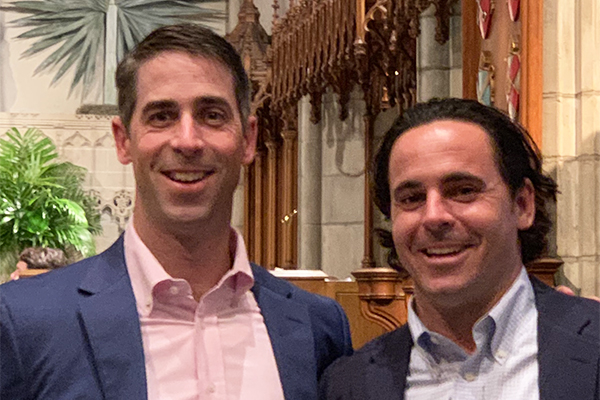 When James ’02 and JB Ferrarone ’98 attended Trinity-Pawling, the wrestling program was at the top of its game. “We were Western New England champs in both 1998 and 2002,” shared JB. “Coach Coratti and Coach Dunham were incredible. It was such a great time to be a part of the team.”

Since graduating, both James and JB happily recall their time at the School — in the classroom, on the mats, and everywhere in between. “Trinity-Pawling taught me to be organized, independent, and accountable,” shared James. “Success requires consistent hard work. I learned early on that if I invested enough time and effort, I’d find success.” JB echoed the same sentiments, reflecting on both the Effort System and the lessons they learned in the wrestling program. “It truly all comes down to hard work. It’s that simple.” And the brothers continue draw on this work ethic in their professional lives running Plath & Co., a custom residential construction company in the San Francisco Bay area.

Though the Ferrarone’s wrestling careers may have ended, the brothers are still very much connected to the School’s wrestling program. In the fall of 2017, James returned to campus for his 15th reunion and he had the chance to meet with Pride Wrestling Coach and fellow alumnus Ralph Fedele ’04. “I learned from Ralph that the mats in McGraw Pavilion were the same mats we used when I was wrestling back in 2002,” James explained. “That was it — I knew JB and I could help.”

Following this visit, James and JB generously donated a new multi-section wrestling mat to McGraw Pavilion. “We wanted to make sure the boys have as great of an experience as we had at T-P,” James stated. “Not having the second set of mats also precluded the School from hosting any tournaments,” added JB. “They have the space with the beautiful field house…and now enough mats to make it all happen.” In fact, Trinity-Pawling hosted the 2019 Western New England Wrestling Championships for the first time in early February.

Looking back on their time at the School, both James and JB are grateful for their experiences and remind the young members of the Pride to cherish their time as students. “Enjoy the years you have at T-P because they go fast,” said JB. James agreed, “Embrace every opportunity the School throws at you…you’ll be so glad you did. I know we are.”

Trinity-Pawling School would like to extend our gratitude to James and JB for their generous donation to the Pride wrestling program. With new mats in the pavilion, eight All-New England wrestlers, and one All-American wrestler returning to the team in 2020, the Pride’s upcoming season looks bright. Roll Pride!