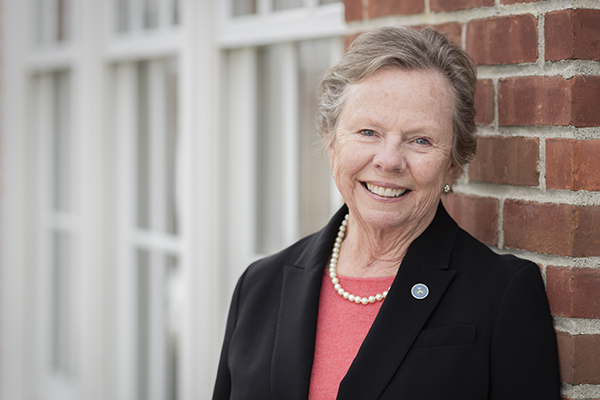 In May 2019, Elizabeth P. Allen retired as President of the Board of Trustees; she held this leadership position for 16 years.

“Serving as the Board President has been the best opportunity I’ve had for volunteer and nonprofit service, because of the people I’ve worked with on the board and in the administration. I’ve been buoyed by the excitement of education and the ability to help develop policies that make Trinity-Pawling so vibrant. Serving as a trustee has been a great gift to me.”

When asked to reflect on the growth of the School over the past four decades, Liz Allen first laughed in amazement. “I never dreamed I’d be involved this long! But this work is so meaningful to me.” She then shared observations that reveal the depth of her institutional knowledge. “Anyone who lived through the 1960s and 70s knows it was a tumultuous time. Phil Smith P’79 came to Trinity-Pawling in 1970 and worked diligently to make the School a fine educational institution. At the time, Trinity-Pawling and Trinity School Manhattan were governed by the same board of trustees, called the Trinity Episcopal Schools Corporation. That board was New York-oriented, so Phil and a few friends of Trinity-Pawling put together an advisory group in 1975 to offer counsel to the Manhattan board on matters that pertained specifically to Trinity-Pawling. Phil invited me to serve on that advisory group, along with then-president Dick Colhoun P’70, P’72 and others. In 1978, Trinity-Pawling separated officially from Trinity School, and we formed our own distinct board. I’ve been on that board ever since. That’s 44 years!”

What has kept her inspired and engaged? “My incredible colleagues over the years, the vitality of the School, and the dedication of the leadership.” Allen has served as a trustee under three headmasters: Phil Smith, Arch Smith, and Bill Taylor, each of whom advanced the School to new heights. “Phil Smith developed programs that made Trinity-Pawling an attractive place for families to send their kids. Under his leadership came the language retraining program and coeducation from the mid 1970s to mid 1980s. Phil also was instrumental in helping to create the Founders League in 1984. Joining that conference put our athletics into a larger, more competitive arena.”

“Arch Smith came in as a science teacher, with a gift for detail and data,” Allen continued. “However, he was also an excellent writer and brought a broad spectrum of skills that served the school well in his 25 years as head, in particular his financial acumen and skill at building out the campus. Now at the helm, Bill Taylor is an innovator and strong moral leader, with deep experience in the Episcopal church. Bill understands how to create curriculum that will serve the needs of today’s population while also training them for the future.”

Allen is pleased to see the same spirit of excitement and commitment in today’s trustees that infused the newly formed board of trustees in 1978. “We discuss and disagree and have different ideas, but in the end we all come together in the service of the School. There’s an unusual synergy among the trustees, more so than on other boards on which I have served. We have 25-year-old young alumni working alongside trustees with 20-plus years of experience. They feel the camaraderie and see the respect we all have for one another. I encourage all the trustees to apply their various gifts and skills to support the mission of the School.”

Allen praises the mentors who preceded her as a president. “Dick Colhoun was a do-er, an entrepreneur. Back in the early 1980s, he and I took several day trips to schools like ours around the New England area to see how they were serving their constituencies. Of course, we were casing the joints and seeing what we could learn! And Stretch Gardiner ’40 was an amazing influence on my life. He was such a kind human being and a dear friend, with enormous persuasive skills and a commanding presence, yet a gracious style of leadership. Other mentors include Millie Berendsen and Tip Kenyon P’77, both perceptive leaders and incredibly wise friends who would offer sound advice. I miss them to this day.”

Strategic planning every ten years has been crucial to Trinity-Pawling’s growth since 1990, according to Allen. “The School’s willingness to engage in these long range planning committees, comprised of trustees and members of the faculty and staff, allows the School to dream for the future. I was honored to chair the Long Range Planning Committee 2000. Serving on those planning committees provides amazing groundwork for developing leadership.”

In 2002, then-President Stretch Gardiner and Headmaster Arch Smith invited Liz Allen to lunch. “During the meal, they asked if I would be willing to succeed Stretch as President of the Board. I didn’t see that coming at all! After my chin hit the floor, I agreed and stepped into the role in 2003. I had no idea how I was going to follow this giant of a man, but everyone supported me. I realized I could do the job if I got myself out of the way, did what I thought was the right thing, and consulted with the head and others.”

Over the past 16 years, Allen says her leadership has evolved greatly. “I had to prepare well, be a perceptive listener, and keep the board focused on upholding the mission of the School. But above all, I strove to support the headmaster and ensure that he has sufficient time to rejuvenate.”

Throughout its 112-year history, Trinity-Pawling has remained grounded in its Episcopal values. Every Long Range Planning Committee since 1990 examines the School’s core values, and All Saints Chapel remains the heart of the community. However, Allen notes that society changes and schools must evolve as well to meet the emerging needs of the population. “Trinity-Pawling has always discerned ways to flourish while remaining grounded in its mission. This School does a superb job educating young men, supporting their families, and encouraging the development of the faculty and staff. I feel enormously proud of my deep connection to this School and grateful for this opportunity. And I would be honored to stay on as a trustee if they’ll have me.”

Rest assured, Liz. A seat at the boardroom table awaits your return in September. The Trinity-Pawling community remains indebted to you for your sagacious leadership and steady presence for 44 years, and counting.