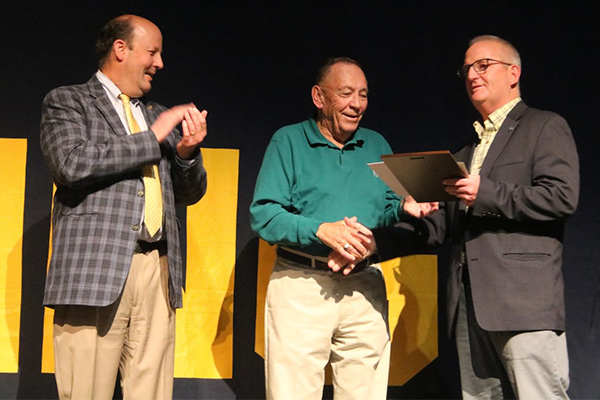 On Friday, May 24, 2019, during the annual Yearbook Dedication and Awards Ceremony, the Trinity-Pawling community honored Miles H. Hubbard, Jr. ’57, P’82 for his 50+ years of service to the School.

Mr. Hubbard grew up in Connecticut. He entered Trinity-Pawling as a sophomore in the fall of 1954. As a senior, he served as a prefect and over his three years at the School, he did not miss an athletic season. He earned nine varsity letters: three for varsity basketball; three for varsity football; two for varsity baseball; and one for varsity track and field.

Following his graduation from Trinity-Pawling, Hubbard attended Middlebury College where he played four years of varsity football and two years of varsity basketball. He graduated in 1961 and entered the U.S. Army for a short period of time.

In 1964, Hubbard returned to Trinity-Pawling as a faculty member, teaching in the History Department and serving as a dorm parent in Cluett, Johnson, and Dunbar. In addition to his teaching and dorm duties, Hubbard also coached football, baseball, lacrosse, basketball, and eventually became Athletic Director. Most notably, he led the undefeated 1993-1994 Varsity Basketball Team in its most successful season — capturing the Tri-State and Founders League Championships, as well as the Class B New England Championship! As both a coach and administrator, Hubbard was instrumental in getting Trinity-Pawling School into the Founders League.

In 2001, Hubbard retired from Trinity-Pawling after 37 years of service to the School — yet he couldn’t stay away for long. He returned in 2008 and has worked in the equipment room ever since, totaling 51 years at Trinity-Pawling…and counting!

During the dedication ceremony, Athletic Director Brian Foster ’79 shared the following remarks celebrating Mr. Hubbard: “When I came back to Trinity-Pawling to teach and coach in 1987, I quickly became friends with the other young teachers on campus. I also got to know the seasoned coaches and teachers — like Mr. Coratti, Mr. Reade, and of course, Mr. Hubbard. These gentlemen all coached three seasons, took care of their families, dorms, classes, advisees, and so much more. They taught me how to go about my business here.

I enjoyed watching Mr. Hubbard coach and work with the students and faculty. As a young coach, I marveled at his ability to hold his players accountable in every aspect of their lives — which drove them crazy! But they still loved him. I strived to create that with my players but was never as successful as Mr. Hubbard.

Over the years, young faculty and coaches would come into the equipment room and usually get some advice or encouragement from Mr. Hubbard. He would also let you know if he thought something was not ‘just right’. You always know where you stand with Mr. Hubbard, because whether you like it or not, he will be honest with you. He loves this School and everything it stands for. Mr. Hubbard has mentored hundreds of students and faculty in his 50+ years at the School, and we are all better for knowing him. This has been his home for 50 years and we are truly fortunate that he chose this place.”

We extend a heartfelt thank you to Mr. Hubbard for his ongoing dedication to Trinity-Pawling — as a student, athlete, prefect, teacher, administrator, mentor, coach, and friend. He continues to have a profound impact on this community. Thank you, Mr. Hubbard!