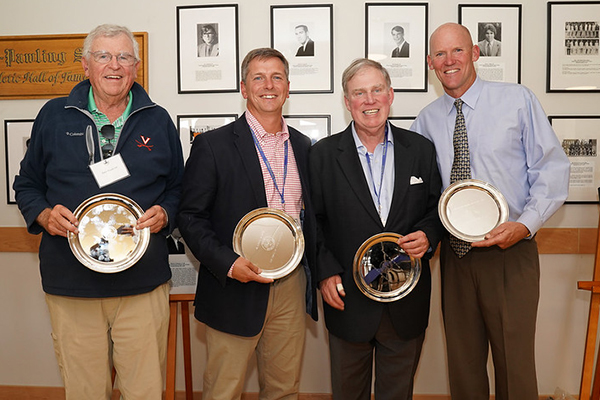 Four alumni were honored and celebrated during Reunion and Homecoming Weekend at the Trinity-Pawling Athletic Hall of Fame Induction in the Smith Field House Class of 1964 Alumni Room.

The second member of the Class of 1964 to be honored, embodied the excellence of the now waning Tri-varsity Athlete. ‘Buck’ played football and basketball at the varsity level and was a dominant force on the lacrosse field, scoring 32 goals in a seven-game season his senior year. He served in the Vermont National Guard for over three decades, and recently passed away at the age of 72.

In his four years at Trinity-Pawling, Wyeth lost only one squash match. He served as team captain and brought his charisma and leadership to the Drama department as well, twice winning the Tennant Drama Award. Wyeth remained in the world of education as the Director of Development at The University of Virginia, and served on the Board of Trustees of Trinity-Pawling from 1980-1986.

Shannon’s leadership at Trinity-Pawling extended beyond the athletic fields, with his service as Head Prefect. At the end of his career wearing the Blue and Gold, Shannon had earned an impressive 10 varsity letters in football, hockey, and lacrosse. He was a member of the 1967 and 1969 undefeated lacrosse teams, and since then he has given back to the Trinity-Pawling community by serving as the Chairman of the Development Committee on the Board of Trustees from 1994-2003.

Casey rounds out the 2019 class of inductees as the youngest member. After averaging over 19 points per game as a senior basketball player at Trinity-Pawling, Casey went on to have a tremendous career at Hobart College — winning Rookie of the Year honors as a freshman and later Hobart men’s basketball MVP his senior year. After a highly lauded 17-year tenure as the Peddie School girls varsity basketball coach, Casey has recently moved to Franklin Road Academy in Nashville, TN as Head of School.