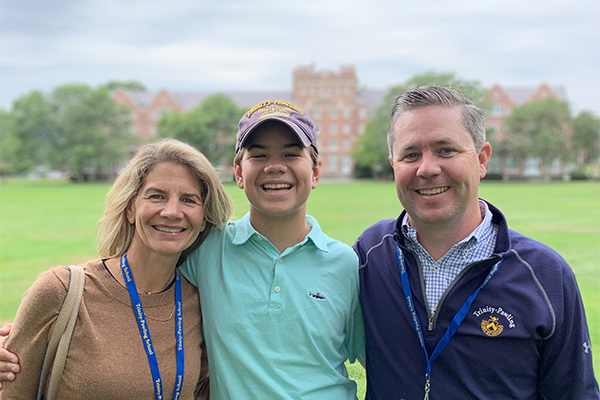 If the only thing constant is change, Matt Deely ’92 is ok with it, even if that statement applies to his, and now his son Jack’s experience at Trinity-Pawling. Certainly, the School that Jack is attending now is markedly different from the Trinity-Pawling of 30 years ago. The Chapel schedule has changed, there are now sit-down lunches instead of dinners, the dress code is updated based on the season, and the buildings have been transformed! And yet, there is a common thread that remains, and for Deely, that’s what is most important.

“Everything has evolved at T-P — it really seems like a different school today. And yet, the end game is the same. The core values, the faculty, and what they can bring out of you — those are all still there. Jack and I are two very different people and what I needed from T-P as a 15-year-old is certainly not the same as what Jack does. But I know, because the important things remain, that he will grow and discover his passions and experience those sparks of self-realization just like I did,” Deely reflects.

Private schools weren’t even on Deely and wife Libby’s radar for their children. Deely brought Jack to a couple of School events over the years — reunion, Candlelight Service, etc. — and the decision to apply truly came from Jack. “He loved the atmosphere on campus. Jack felt there was a true community vibe and great camaraderie,” Deely mentioned. “He’s the oldest of four siblings, so the fact that there is a real family-feel at the School made a big difference for him.”

One thing that Deely has stressed to Jack is that this needs to be his experience. “The ball is in his court. I don’t want him to be the ‘son of Matt Deely’ — it’s his responsibility to take initiative and make his time at the School his own.” Deely remarks. Of course, there are parallels that they’re seeing already, and Deely is thrilled about that! “One of the best experiences for me came in my senior year English class. My teacher, Mr. Britton, was a stickler for grammar and pronunciation. I learned so much from him, and it has served me all my life! Similarly, Jack is having a great experience in Ralph Fedele’s English class this year. Mr. Fedele’s classroom provides an important forum for discussion of ideas and themes – Jack really loves it!” Deely comments.

Deely credits the School with teaching him critical communication skills, how to manage his time, and how to promote and advocate for ideas and projects. “Don’t tell my college this, but I learned more about life from T-P than I did during my four years in higher ed!” Deely jokes. As for what he’d like Jack to gain from his time at the School, Deely says, “Jack’s experience will be different but the same. One of the best things about being a legacy parent is that I know Trinity-Pawling will get my son where he needs to be, because it did the same for me!”