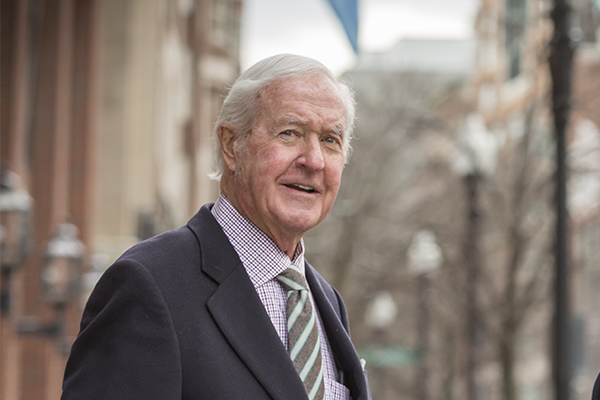 Phil Haughey ’53 went to Trinity-Pawling at age 15, the first time he had left the Commonwealth of Massachusetts. What inspired the young man to leave his beloved Framingham?

“Dick Clasby … he was a standout athlete at Natick High School, our rival, and broke every record in football, hockey, baseball, and track. Every kid growing up in greater Boston idolized him.” Clasby spent a postgraduate year at Trinity-Pawling in 1950 before heading to Harvard where he continued his athletic legacy. “Our fathers were friends and Mr. Clasby asked my dad if I would consider going to Trinity-Pawling. Mr. Dann arranged a scholarship for me so off I went in 1950. I am eternally grateful to Dick; he was a terrific guy, a true role model.”

Haughey spent three formative years at Trinity-Pawling, guided by the men who revived the School. “Mr. Dann, Mr. Riddleberger, and Mr. Dunbar were getting the School up and running. Of course, we never had any sense of the administrative challenges and pressures they were under. Mr. Karpoe coached me in football, basketball, and baseball; he was also my advisor and taught me chemistry and physics. Mr. Tirrell looked out for guys from the Boston area where he came from. He was in charge of the work program and always gave me the back steps of Barstow. Well, no one used those stairs so I never had to pick up a single piece of paper!”

“T-P was the best place in America for a boy,” Haughey reflects. “I could walk out my door, shoot hoops, swim in the pool, eat, sleep, and do a little studying with friends. What could be better?” A celebrated athlete himself, Haughey played varsity basketball and captained the football and baseball teams. He was inducted into the School’s Athletic Hall of Fame in 1998. Like Clasby,

Haughey continued at Harvard where he studied history and government, played three sports, and presided over the Harvard Varsity Club. Haughey has spent his career in commercial real estate and remains an ardent supporter of Trinity-Pawling. Along with his wife Peggy, Haughey has graciously hosted the Trinity-Pawling Holiday Reception at the Harvard Club of Boston on six occasions. Thank you for your continued support and generosity, Phil!