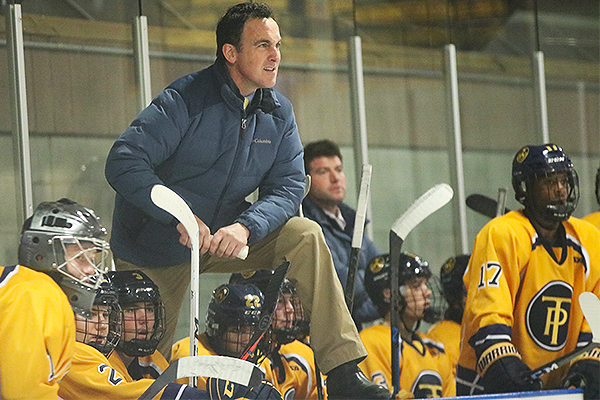 Expectations are high for this team of proven returners and many talented newcomers. Forwards Taylor Ewing, John Gelatt, Jack Musa, and Stephen Willey showed last season that they could control the play on both sides of the puck. There will be some high-powered players donning the Trinity-Pawling sweater for the first time; that, combined with the impressive off-season development of returning juniors Jake Aloi and Kyle Stober will give essential depth up-front. Backend veterans Christian Colantonio and goaltender Davvid O’Keefe both played critical roles in the team’s strong finish last season. Many of the new skaters should fill top roles in the lineup. Through December, the Pride saw wins against Albany Academy and Hoosac School in Pawling and then Loomis Chaffee at Trinity College, followed by an 8-1 destruction of Tabor Academy to round out the Avon Holiday Tournament. Captains Ewing and Willey lead the way as Pride point-getters thus far.

The Trinity-Pawling varsity basketball team has many returning players from the 2018-19 campaign. Senior captain Truth Harris will be counted on to lead this team. He is a major talent and one of the most exciting players to watch in the NEPSAC. Fellow senior Chris Gleaton has returned with a more aggressive approach to his game. He is fast, athletic, and shoots the ball well. Tadhg Crowley ’20 will be asked to anchor our defense; at 6’9″ he is a rim defender and ferocious rebounder. PG Justin Archer, from Edison, NJ is a 6’7″ versatile player who can score from anywhere on the court. Fellow PG Ronnie Toole is a solid combo guard from Morgantown, PA. Other returners will be counted on this year to contribute a lot. Senior Sam Fechner will play as a versatile wing guard from Germany, Josiah Turner as a 6’8″ forward with a nice shooting touch, and Tim Moran as a “do it all” type of player who has improved greatly from last year. Rounding out the lineup is strong, scrappy senior Donte’ Williams, junior Zach Wolkoff, DeAndre Williams, who is a rare freshman phenom, and postgraduate lacrosse star Noah Martin who was a nice surprise pick-up. Through December, the squad has picked up wins against the Hun School and Westminster, as well as rolling over tournament foes Tabor Academy and Belmont Hill before falling to Thayer in the final contest of 2019. Harris and Archer continue to electrify the gym as high scorers.

The Trinity-Pawling wrestlers return a strong upper class bolstered by new additions to the team. As a group, the Pride placed second at Western New England’s last winter, fourth at New England’s, and 20th at the National Prep Tournament. Individually, seven wrestlers were awarded place-winner status at New England’s. All-American Dietrich will begin the season healthy after a knee injury last football season, and recent Wesleyan commit Lucas Hughes and Gettysburg-bound David Bancroft lead the team in their final season with the Pride. New additions Edwards, Miller, Mason Clark, and Harry Clark will compete at a high level. Through December, the wrestlers placed second out of sixteen at the Hopkins tournament, and easily took down Marvelwood at home.

The varsity squash team is looking to move forward from last year. Returning players from last year’s team are providing continuity and leadership to the new members of the team. Those who were on JV or 3rds in the past (Zhang, Mezzatesta, Li, Li, Morgan, Kwon) have worked hard on their games and are excited to break through at the varsity level. Underclassmen Newbold and Friedman are new to Trinity-Pawling but arrive with a lot of squash experience and are excited to jump in towards the top of the order to make a big impact right away.
* Coach Fritts has been with the squash program for 10 years, and this is his second season at the helm. Roll Pride!