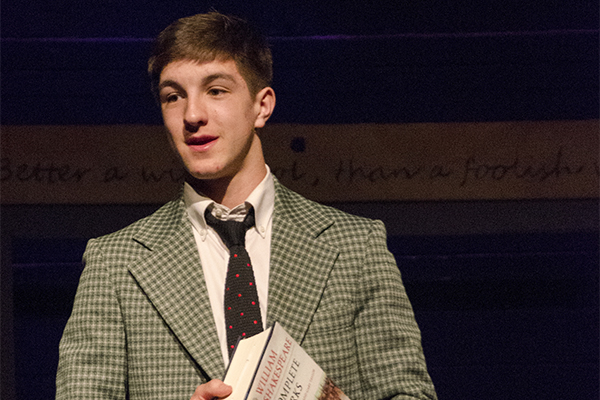 The Class of 2020 Head Prefect Solomon Hess is known for his diverse engagements as a varsity lacrosse player, actor, musician, activist, and campus leader. His Senior Independent Project is coming to life as he builds theater production into his multiplicity of talent and experiences at Trinity-Pawling. Hess says the original inspiration came in math class as a junior, with a doodle of a tall robed figure on a page divider. Almost a full year later, he has cast his musical production and is preparing for his directing debut with A Train Through The Dark.

After his hilarious starring role as spelling bee winner William Morris Barfée in the Winter 2019 production of The 25th Annual Putnam County Spelling Bee, Hess leaned into the power of humor in the writing of his own play. A background in piano lessons and 4-year music study at Trinity-Pawling where he picked up the guitar, bass, and drums equipped Hess to compose all of the numbers for his own musical.

Reflecting on the writing process, Hess acknowledged the importance of discipline as he had to set his own deadlines. He describes the first table reading of his finished script as surreal. “Hearing my own words out of someone else’s mouth, I was super critical. It was that first table read where I was able to tell myself that this could actually happen, and that people would come to see the play.”

Hess has partnered with the American Foundation for Suicide Prevention to fundraise for the Hudson Valley Chapter, with donations counting as admission to the play. “I chose AFSP because their big push is the idea of hope,” he explains. “I wanted to make the show mean more than just coming to see something I created. I want people to come because they support what the play is trying to fight.”

A Train Through The Dark debuts in Gardiner Theater on Friday, January 31, 2020 at 8:00 PM, with additional playings at 8:00 PM on Saturday, February 1, and 2:00 PM on Sunday February 2. A link to buy tickets via donation to the AFSP can be located here.