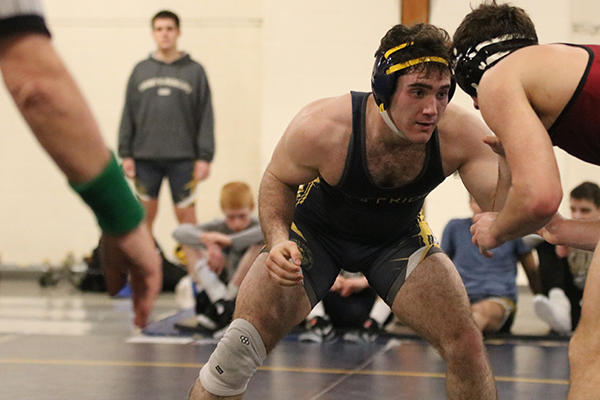 At New England’s this past weekend, Liam Dietrich ’21 became the New England Champion, while Lucas Hughes ’20 took second place in his class. Jeff Miller ’22 followed in third, Accomando ’22 in fourth, Hammel ’20 and Lee ’22 in fifth, and Bancroft ’20 rounded it out with a sixth-place finish.

The final meet at Prep Nationals will be held on February 22, 2020, at Lehigh University, where Liam Dietrich ’21 will look to take the top spot in the country.

The Trinity-Pawling basketball team went 2-3 in February, beating Choate and Berkshire to push their season record to 9-9. Justin Archer ’20 has continued to lead the way for the Pride, scoring an impressive 22.8 points per game this month. The final four-game stretch will dictate postseason play as the Pride sits on the brink of Class A playoff contention.

Varsity hockey also went 2-3 in February, with wins against Choate and Kent. Taylor Ewing ’20 and John Gelatt ’20 continue to lead the Pride in scoring, leading the way in an 8-goal showing against the visiting Lions on Saturday night’s charity game. The team has 5 more contests to close out the season.

Varsity squash got their second victory of the year last week against Canterbury, and after a tough January, will look to even up their February mark in the final match of the season against Millbrook on February 26, 2020.