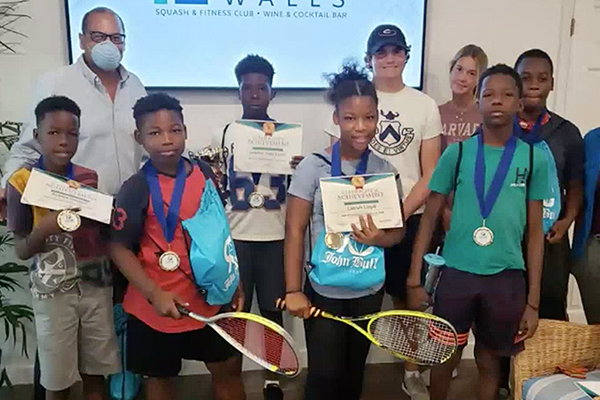 Over the summer, Whit Hazlewood ’21 took his squash game to the next level. “Back home in the Bahamas, two activities that I love are playing squash and helping my community,” he began. “So for my Senior Independent Project (SIP), I decided to organize and coach a squash camp for underprivileged children.”

Although it was difficult at first to organize the camp around COVID restrictions, Hazlewood worked closely with Four Walls Squash and Social Club, a multipurpose wellness and entertainment facility, and Lend a Hand Bahamas, a local nonprofit organization focused on community development. “Lend a Hand Bahamas had a small group of kids who were interested in joining a summer camp,” Hazlewood explained. “They were all between 12 and 15 years old. Most of them had never even heard of squash!” Introducing the campers to a new sport that they now love, Hazlewood shared, made the experience that much more rewarding.

The squash camp was held at Four Walls for two weeks. Hazlewood and his family purchased rackets and goggles for the children to use, and later donated the gear to the facility. “We played squash every day from 9:00 AM to 12:00 PM. We would start with stretches and learning about the game and then work on running drills and squash skills,” Hazlewood explained. “I actually used the same stretches and drills that we use in varsity squash practice here at T-P!”

In addition to coaching his new players in their squash techniques, Hazlewood also wanted to provide them with a filling and healthy lunch after each day of camp. “Many of the kids are very impoverished, and I wanted to make sure they had at least one solid meal during camp. So I approached the manager of our local Subway and asked if he would like to sponsor the camp,” Hazlewood explained. “He agreed! The kids received daily lunchboxes with a sandwich and snack.”

Throughout the camp, Hazlewood enjoyed seeing his players learn and grow — both as squash players and friends. He taught them about sportsmanship, focus and discipline, and having fun on the court, no matter the outcome of the match. “It was so rewarding to watch them compete at the end of the two weeks and see how much they had learned.” Hazlewood continues to keep in touch with his players and also plans to hold coaching sessions with them when he is home during school breaks, and even through college.

In true SIP fashion, Hazlewood was able to pursue a passion, learn to solve problems and overcome challenges, and think critically and creativity — all while making a difference in his community. “The camp was such a great experience for me,” he concluded. “I’m already looking forward to the next one.”