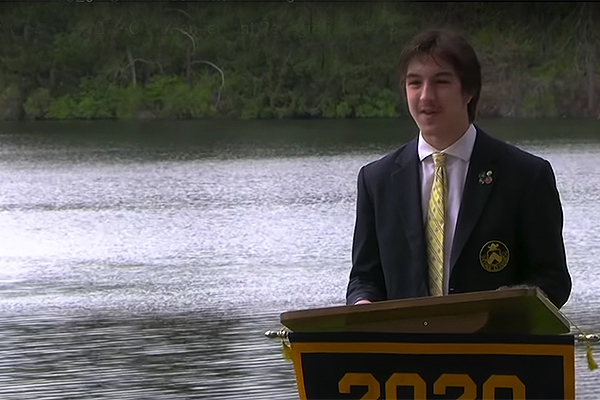 When Solomon Hess ’20 began his senior year last fall, the world was his oyster. As Head Prefect, he was excited to lead the student body and the School through a new year. He eagerly anticipated his involvement in sports and theater and had big plans for his Senior Independent Project. While Hess was able to fulfill many of his anticipated goals, including the masterful staging of a full-length musical he wrote, cast, and directed, his Spring Term took a real-life dramatic turn in March. COVID-19 swept across the country, Trinity-Pawling transitioned to an all-remote learning model, and he was tasked with leading his fellow students through one of the most difficult times in the School’s history.

“While sad and unprecedented, the news that we would not be able to return in the spring wasn’t exactly life-changing. It was just another obstacle that we would have to work through together,” states Hess. Indeed, throughout the Spring Term, Hess played an integral role, supporting classmates during virtual school meetings and continuing the tradition of dismissing “Seniors!” first at virtual Chapel — a gesture of understanding and solidarity in a difficult time. His inspiring, yet pragmatic graduation speech encouraged his fellow brothers to “get busy living” despite the challenges they had all faced.

This attitude of resilience has buoyed Hess and guided him through his first semester at Vassar College as well. Certainly, the college experience was much different for all incoming freshmen this fall. With fewer students on campus, many classes online, and restrictions on sports and activities, learning to be creative took on a whole new meaning!

“The fall semester was definitely frustrating at times but for the most part a great learning experience. I’ve been working around COVID the best I can, with lacrosse and theater. Due to the lack of live theater options on campus, I’ve been practicing more stand-up. Next semester, I will have my own 30-minute set on campus at some point,” Hess commented.

Not willing to let obstacles stand in his way, Hess has found new opportunities for involvement and connection. “Although I couldn’t jump right into theater, the restrictions on performing have not stopped me from building connections with people I can learn from and being creative in my own time. I’ve created a couple of short films, befriended many upperclassmen in the drama and film departments, and I am looking forward to a spring semester with more classes dedicated to my major.” he shares.

For certain, his time at Trinity-Pawling helped to shape his positive attitude and determination, and Hess cites theater teacher Kent Burnham as well as English teacher Bill Dunham as critical influences in his current college success.

“The most important takeaway I got from Trinity-Pawling was the experience and people. Grades do not matter as much as how you get them. Class levels don’t matter as much as your approach to them. Find something you love and run with it,” Hess encourages.

Wise words that we can all take to heart, for sure. Best wishes Solomon, as you pursue your dreams — we look forward to following your success!