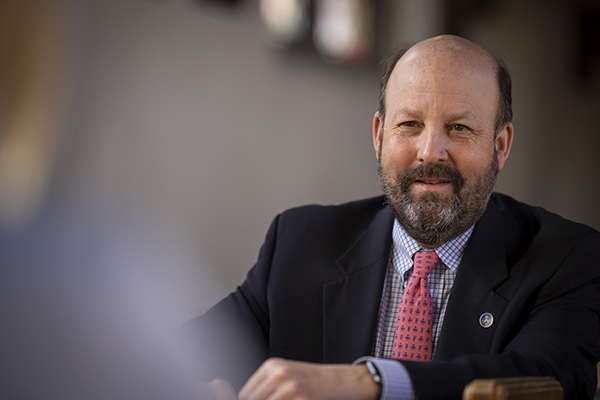 My office is a veritable museum of items that have particular meaning to me, either personally or professionally. In fact, if someone ever wanted to do a forensic analysis of my personality, they could probably attempt to find meaning in the hundreds of items that adorn shelves, bookcases, and tabletops in my office. Of course, the meaning of each item is deeply known to me.

There are the obvious items that do not require such heady analysis: the family pictures, mostly including photographs of my son and daughter as children; the various lions around the office; or the nameplates from past offices. Then, there are a whole host of other items that would make someone’s head itch with wonder: the hard hat; the Stay-Puft Marshmallow Man; or Gumby.

Among the more eclectic of items is something new to the collection. It is a Chinese print of a hibiscus tree with the caption in Mandarin that reads “Spring Returns to Heaven and Earth.” It was presented to me recently by a student upon his arrival this March to Trinity-Pawling — his first return to the campus since last spring when he was forced to leave due to a rapidly escalating pandemic and return to his home in China. It has a treasured spot in my office, sitting on a windowsill ensuring that it will catch my eye when my gaze drifts above my computer screen to the sights on the quad.

When he gave it to me, he explained that it was a gift from his parents and from him, in gratitude for his return to campus and in recognition that the campus was as safe as it could be from the effects of COVID-19. Now, this is a student who left China en route to Pawling, New York knowing that he was required by U.S. regulations to spend two weeks quarantining in Dubai before he could return to the United States, where he would then have to spend another ten days in quarantine on campus before he could resume some semblance of a normal life. And, he was thanking me!

The picture will likely never leave its place on the windowsill as long as I occupy this office in Cluett. It is a daily reminder of the gratitude that I have for this boy, his family, and so many others who made incredible efforts to return to campus to bring life to this learning community in the midst of a pandemic. Without such a commitment, Trinity-Pawling would not be the place that it is. Perhaps, it would not even be open. No, it is I that must thank each of them! Spring has returned to Heaven and Earth, indeed!