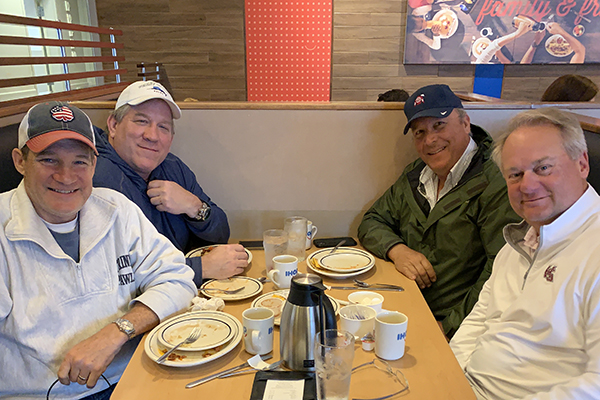 The past year has brought much into focus, including the critical importance of holding our friends and loved ones close and taking nothing for granted. Robert Brownlee ’82 agrees wholeheartedly and took the initiative this spring to organize an off-campus gathering for his classmates so they could reconnect before their 40th reunion. What transpired was a weekend of good food, great times, and lots of reminiscing!

Brownlee and his classmates stay connected on Facebook and other social media and when they learned recently that a close friend of a fellow alum had passed away, they were saddened and spurred into action. “I had a sudden realization that we can’t wait on life and circumstances to be perfect to do something. I missed my T-P brothers and wanted to get us together again,” Brownlee comments.

He proceeded to connect with the Trinity-Pawling Office of Advancement, secured an updated contact list, and reached out to his classmates about an April gathering at his family’s vacation home in Ellijay, GA. He heard back from a few guys and they put it on the books.

Brownlee, Tom Wilkinson, and Bill Dickson arrived Friday, April 9th, and Ted Allegaert and David Hobbs came in on Saturday morning. A couple of others were planning to attend as well but had last-minute conflicts. The five “brothers” settled in and spent a lot of time just catching up. “Although Hobbs and I talk on a regular basis, I hadn’t seen Bill since graduation (!), or Tom and Ted since previous reunions. We had a lot to talk about!” Brownlee remarks.

They shared memories of fun moments at Trinity-Pawling, connections over the years between classmates and their families, and stories about favorite teachers, including Dean of Students and Wrestling Coach Eric Ruoss. In between, they enjoyed a couple of great meals out and also called fellow classmates to catch up.

“Hands down, the best part of the weekend was just the opportunity to reminisce about old times and our shared experiences. Trinity-Pawling is family — from your classmates to teammates, to coaches, and the faculty. You create bonds there that you just don’t in a public school environment. T-P had an immeasurable impact on my life, even more so than my college years,” Brownlee acknowledges.

As for future gatherings, the group is already talking about them! “The first will be our 40th in the fall of 2022. No excuses guys — just get on that plane and join us! You know we’re going to have fun!” An enthusiastic endorsement backed by a weekend of wonderful memories, and one that we stand by 100% — we look forward to welcoming you all back to campus, Class of 1982!