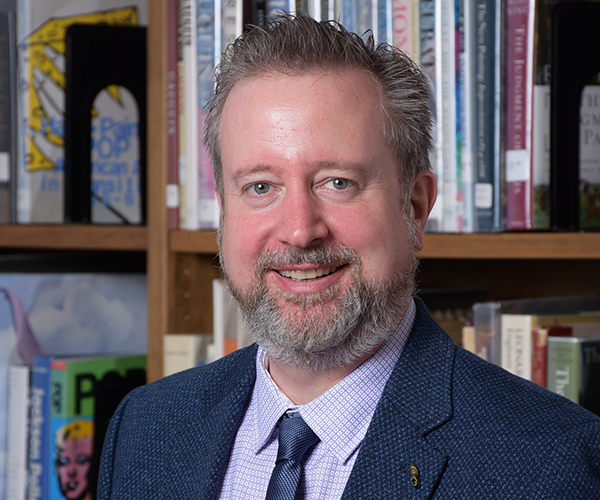 William Norman’s first full semester at Trinity-Pawling has been action-packed. Since arriving on campus as the new Director of Theater Arts, Norman has successfully directed his first play (The Odd Couple), and taught Public Speaking, Improvisation, Theater Practices, and Middle School Theater, all while learning how to be a dorm parent and coming up to speed with the various nuances of boarding school life.

“It’s been very full,” Norman reflects, “but I love having a lot to do. I was at my last school for 17 years, but a boarding school is a new challenge, which is what I’m looking for…I’m thrilled about that.” Indeed, it’s been a thrilling ride thus far for Norman, and he couldn’t be happier. “It’s all very special. It’s beautiful. I love the way things are being run around here. I love the collaboration. I love the way the community comes together for meals and chapel. That’s a very special tradition. I really enjoyed the Saturday night football game. That sort of offering makes Trinity-Pawling a very special place. The whole experience has been great.”

Just as Norman has enjoyed being here, we’ve enjoyed having him on campus, as he brings a wealth of wisdom to his role at Trinity-Pawling.

A graduate of the Tisch School of the Arts at New York University, Norman comes to campus after a long stint in New York City where he taught at the Ethical Culture Fieldston School, performed in musicals, and played in various rock-jazz bands across the city.

“I’ve been performing my whole life. In fact, I learned my love of performing at an all-boys school, so I’m hoping to help the boys of Trinity-Pawling realize some untapped potential and creativity. I mean, the arts are fun. I think the arts are a window and doorway to understanding, and so they can be a home to a lot of people. It’s a really friendly environment. It’s collaborative with just a hint of competition, but, in the end, we’re all working toward the same goal. That’s what I love about the arts and performing.”

With one play in the books, Norman has already turned his attention to the winter production. “We’ll be performing Avenue Q (the school edition). It’s a musical comedy that uses Muppet-like puppets to tell the story of recent college graduates trying to find their purpose in life. It’s like Sesame Street but now, instead of learning the alphabet, they have BAs in English and make bad life decisions.”

In addition to directing great plays, William brings his own fun energy to campus life each day. He is joined by his fiancé, Alyce and their dog Scarlet who have also jumped right into community life. “Alyce helped with costume design for The Odd Couple, and even Scarlet got in on the action during rehearsals.”

It’s been action-packed for sure, but that’s just the way Norman likes it!

by The Reverend Daniel Lennox