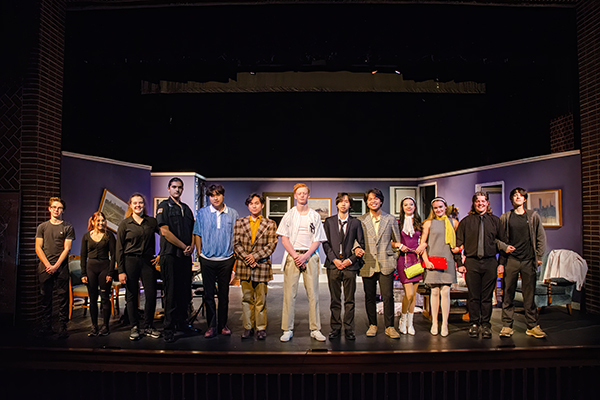 Act I: A hot summer night in 1965. The scene opened to a disgruntled group in a dilapidated apartment, waiting for a poker hand to be dealt.

Hung Phan ’23 played Felix Ungar, the pathetic divorcee who was taken in by Oscar Madison (played by Harry Clark ’23) after being kicked out of his home. Quickly, the cluttered apartment was tidied by Felix to the point of annoyance for his new host Oscar. In rolled poker night, and the group was dismayed to see their friends at each other’s necks as the differences that once fit the two together proved incompatible as roommates.

The laugh-out-loud comedy showed the myriad ways friends need each other, while sometimes they just need some space. Guest actors Sarah Knowles and Ellie Poon played the hilarious Pigeon sisters, and the rest of the cast quipped and guffawed as friendships were tested, unraveled, and patched together.

Congratulations to Mr. Norman for his first Trinity-Pawling production, and many thanks to Mr. Bresler, Mr. Reilly, and Mr. Poon for all their behind-the-scenes work!