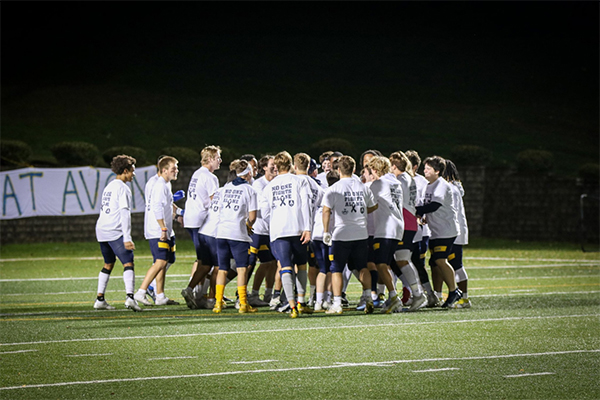 Grounded in Trinity-Pawling’s educational philosophy is a strong belief that we gain a better understanding of ourselves through service to others. Service-learning is an important part of student life on campus, allowing students to become actively engaged in our local community and beyond. Through a variety of fundraising and service initiatives this year, our students have demonstrated a genuine commitment to helping others.

Here is a sampling of the student-led fundraisers that have taken place on campus over the past several months:

On October 27, 2021, players, coaches, parents, friends, and fans from Trinity-Pawling and Avon Old Farms rallied together to raise money for the Pediatric Brain Tumor Foundation. The special game was held in honor of Matt Dooley ’23, a beloved member of the Trinity-Pawling family. Led by members of the varsity football team, all proceeds from the game were donated to the Pediatric Brain Tumor Foundation in Matt’s honor.

Last fall, students in the National Honor Society (NHS) rallied support from the School community for their annual “Movember” fundraiser. Participants in “Movember” made a donation to grow facial hair for the month of November, in order to raise awareness of men’s mental health issues. The NHS raised nearly $300 in total.

At the end of Wintersession in December 2021, as part of the final challenge for The Great Trinity-Pawling Bake-Off Winter Project, students hosted an on-campus cake auction and raised $1,810 for brain cancer research. The delicious array of baked goods was provided by a number of student bakers, faculty members, faculty children, and Pride Parents. After a rousing round of bidding back and forth, the lucky auction winners included 21 students, two faculty members, one faculty child, and one parent. It was an exciting evening on campus raising money for a cause close to our hearts.

In February, the National Honor Society held its annual “Pie in the Face” fundraiser in Scully Hall. In the week leading up to the event, students and faculty purchased tickets to determine who would be the lucky pie throwers and the not-so-lucky receivers of the pie in their face. Nearly $900 were raised and donated to the Leukemia and Lymphoma Society, a global leader in the fight against cancer.

Throughout the school year, Trinity-Pawling students and members of the National Honor Society have worked closely with the Pawling Resource Center — an important non-profit organization in our local community. Students helped deliver items to their food pantry and volunteered their time at the Center’s annual Walkathon fundraiser.

This year, students in the Relay for Life Club raised over $2,000 for the American Cancer Society, and nearly 230 luminarias were created by the School community to honor and remember those lives that have been touched by cancer. On April 21, 2022, students and faculty gathered in All Saints’ Chapel for a beautiful luminaria service, in which students in the Relay for Life Club read the luminaria names aloud and sounded a bell for each person. The service was a meaningful end to an important day on campus, as the community honored and celebrated the life and legacy of Matt Dooley ’23. Members of the Relay for Life Club named April 21 as the annual date for the luminaria service on campus as a tribute to Matt, whose birthday was April 21.

We extend a heartfelt thank you to all students who have organized and participated in fundraising events this school year. Your compassion, generosity, and dedication to helping others continue to make this world a better place.