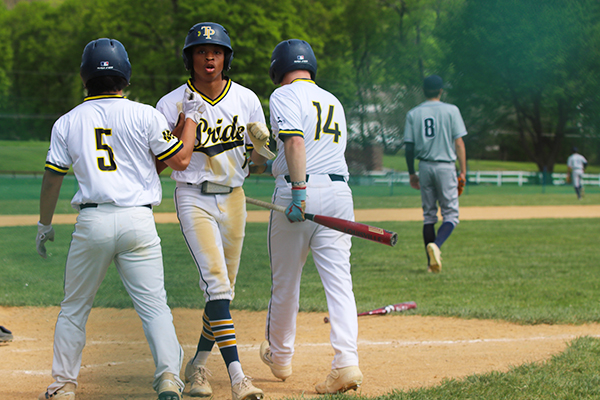 For the first time, the Founder’s League extended spring post-season play to include the top 8 teams from the regular season. Both varsity baseball and lacrosse achieved a 5th place finish, giving Trinity-Pawling the pleasure of hosting the 5-8 tournament in Pawling last week, while track and field placed 4th in New England at the New England Invitational.

The varsity lacrosse team finished the season with a 9-8 record, winning their final two games at home in post-season play last week. The Bill Labelle Coaches Award went to Mack Till ’22, who will play at the University of Virginia next year. Kasey Mongillo ’22 earned the Offensive MVP while the Defensive MVP went to goalie Landon Whitney ’23. Tyler Olsen ’24 stepped up in his sophomore campaign, despite a broken finger midway through the season, and other young contributors Alex Hicks ’24, Michael Provenza ’23, Drew Filanowski ’23, and Tony Provenza ’24 played large roles on offense. Defensively, Connor Huguenard ’24, Casey Sodolski ’23, and Adam Franasiak ’22 played every game, while Colin Davis ’23 had a huge LSM presence down the stretch. With so many young contributors, the boys will look to build on their underclassmen campaigns to make an even bigger impact next year. Congratulations seniors!

Varsity baseball earned a 7-13 record, in a season where pitching struggled to keep the Pride in many games. Nick Vega ’22 took the Annual Award with a team-leading .359 batting average and 20 runs scored in 20 games. Liam Haywood ’23 struck out just 8 times in 85 plate appearances while notching a .328 batting average. Eliot Ferch ’23 also contributed from the plate, with a team-leading 25 RBIs. Nick Hios ’23 stole 8 bases and was never caught stealing, and Jalen Greene ’23 led the team with 12 steals. Late in the season, PG Devon Diaco recovered from a finger injury sustained during wrestling season, and joined the team to pitch 5 strong innings through 3 games, with 7 strikeouts, conceding just 3 hits and 0 earned runs. Throughout the season, Nick Hios ’23 and PGs Bradford Alexander and Ryan Lorenzo picked up the bulk of the innings from the mound, tossing a combined 86 innings. It is worth noting that projected ace Zach Peters ’22 was not able to pitch this year due to an off-season Tommy John surgery, but he received the Triandafolou Award for contributions to the program for his unwavering support as a base coach, bullpen catcher, and pitching coach in his senior season. He will matriculate at VCU next year to pitch in the A-10 Conference. Congratulations to all the seniors, and good luck at the next level!

A select group of Pride track and field athletes competed at the NEPSTA New England Championship meet at St. Paul’s in Concord, NH. Garrett Backus ’23 finished 2nd in the 100m, behind the winner of the race, who broke the NEPSTA record. Backus also ran in the 200m and finished 3rd, and ran the anchor on the 4x100m team, which placed fourth and included stellar performances from Luke Daly ’22, Cole Enslen ’22, and Cristobal Tola ’23. Tola also ran a superb 400m split in the individual 400m. In the 110m hurdles finals race, Daly ran a personal record. Enslen finished 3rd in the javelin with his best throw of the year and also placed 6th in the triple jump. Rahtrel Perry ’22 competed in the shot put and the discus, placing 2nd in the shot put, and 7th in the discus. Mason Clark ’22 also competed in the shot put and placed 10th. Robbie Accomando ’22 ran a great 800m race to close out his stellar career, helping the nimble Trinity-Pawling team place 6th overall, just one point out of 4th — an incredible result for the Pride. Well done on a superb year!

The biggest highlight for the varsity tennis team was their convincing win at Salisbury in the final match of the year. Everyone on the team played well, with Leo Lio ’24, Kento Maeda ’23, Tony Gao ’22, and Bryce Tolman ’23 all winning their singles matches. Over the course of the season, every player won at least one match, proving the overall success of a team that was made up of boys whose primary sport was not tennis. The dynamic Japanese/French Canadian doubles team of Kento Maeda ’23 and Raphael Denis ’23 was the brightest spot for the team this year. Although they had never played together, they proved to be an extremely exciting duo, and will be looking to repeat their success as senior leaders next season.