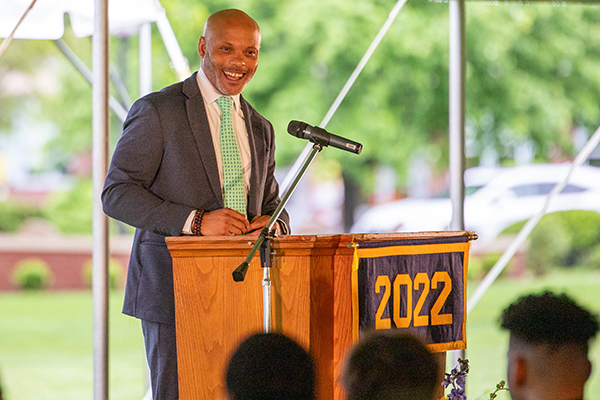 “Our Commencement speaker this year is the President and CEO of the Charlotte Center for Legal Advocacy in Charlotte, North Carolina. He is a graduate of The University of North Carolina at Charlotte, where he majored in Criminal Justice, minored in Economics, was a leader in student government, and was a member of the track and field team. From there, Toussaint pursued his law degree at Regent University where he received numerous awards for his scholarship and his civic activism.

As a civil rights activist in Charlotte, Mr. Romain gained national attention for his critical role in maintaining and defending peaceful protests after an encounter with the police led to the shooting death of Keith Lamont Scott. After the shooting, some of the protests turned violent and Mr. Romain put himself in the middle of the situation, at times acting as a human barrier between the protestors and the police, as he urged for peace, justice, and reconciliation.

Recently, Mr. Romain served as the Deputy General Counsel at Appalachian State University for three years before leaving this post to assume his new role leading the Charlotte Center for Legal Advocacy, a nonprofit organization that helps people in Charlotte who need legal assistance but who lack the financial resources to obtain such services. The legal system is, in many ways, the framework of our democracy. By assisting those who need services but who cannot afford them, organizations like the Charlotte Center for Legal Advocacy ensure that people’s rights to citizenship are protected.

Most recently, Mr. Romain has served on the Trinity-Pawling School Board of Trustees, completing two terms of service. I have been grateful for his leadership in this capacity and as an alumnus of the School. It is always gratifying to see graduates remain active with the School and step into roles of leadership to help the School grow.

Of course, my earlier memories of Mr. Toussaint Romain are of T.C. Romain, who arrived at Trinity-Pawling from California in the fall of his sophomore year in 1993. My untrammeled memory is of a young leader who excelled in the classroom and in athletics and as a citizen. He was the captain of the track and field team that had a fabulous season. He was a leader in the Chapel and the President of the Minority Student Union, which was a tremendously valuable organization that promoted student empowerment, engagement, and belonging.

As a student, Mr. Romain was not unlike many of you when you arrived at Trinity-Pawling. He needed to find his own way and learn how to approach his responsibilities, particularly his academic responsibilities, on his own terms. Once he figured this out, he soared as a student and as a leader. It is that sense of self-awareness that propelled this growth, as it has and will continue to do for you.

As I was recently reviewing his admissions file, something jumped right off the page. In answering the question that asked about the applicant’s strengths, T.C. responded that “Although I am shy, I go out of my way to help others. One of my greatest strengths is that I have always had the desire to be somebody that makes a difference in the world.”

While I can attest that you seemed to have grown out of your shyness, T.C., your 14-year-old self was right in saying that you have strengths in making a difference in the world. If your time at Trinity-Pawling helped to refine these strengths and to broaden this sense of self-awareness for you, then I am grateful that the School had that opportunity.

It is my honor and privilege to introduce Mr. Toussaint Romain, Class of 1996, and welcome him to the podium.”