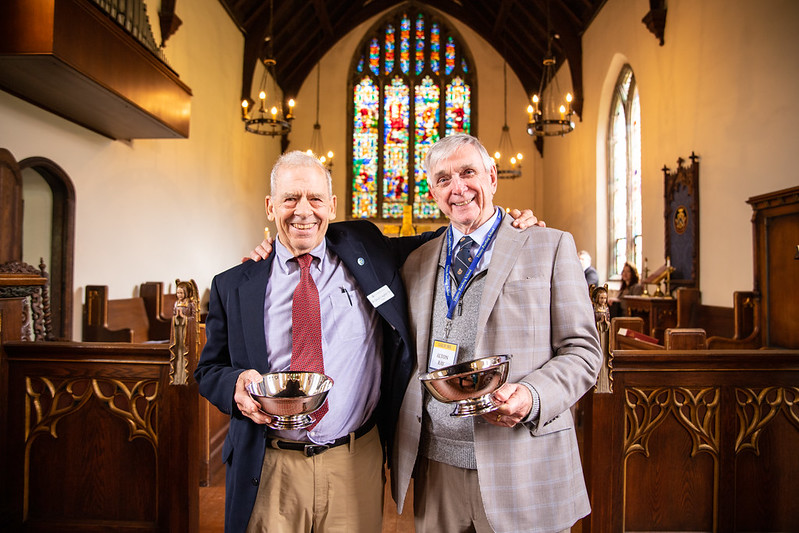 Three alumni were honored with the Distinguished Alumni Award during the Alumni Memorial Service in the All Saints’ Chapel on Saturday, October 1. This award was developed to recognize an alumnus’ outstanding lifetime service to Trinity-Pawling School. The recipient must be a member of the alumni community, have an established record of service to the School, and have demonstrated significant achievement in his or her chosen profession.

In his two years at Trinity-Pawling, Joe Rice was an avid athlete playing football, hockey, basketball, and track. He wrote for the T-P Times and was sports editor for the yearbook. Joe served as a lieutenant in the U.S. Marine Corps for three years following his graduation from Williams College in 1954. He then earned his law degree from Harvard and spent six years as a lawyer before turning to investment banking and management for the duration of his career. He founded Clayton, Dubilier, and Rice, one of the oldest private equity firms in the world. Rice retired in 2013.

Terry Ray acknowledges that he arrived as a freshman from Framingham, Massachusetts in need of direction. He found his path by embracing the myriad opportunities the School offered, from athletics to numerous clubs. “Trinity-Pawling gave me focus, taught me how to use ‘sir’ and ‘ma’am,’ and showed me it was okay to succeed and to make mistakes.” After earning his degree in civil engineering from the University of Michigan in 1968, Ray launched into a career in offshore engineering projects in Brazil, Dubai, and Angola. Despite living and traveling internationally, Ray found time to participate in alumni events and to serve as a trustee from 1998 to 2022. Ray’s son, Sean, graduated from Trinity-Pawling in 2001. Ray hopes Sean’s son Tucker will be a member of the Class of 2030.

“I feel blessed to have jobs I love, a strong family, and the ability to give back to the School however I can,” Ray shared from the pulpit. “I was a scholarship student, and I want to provide that same opportunity for other boys.”

David Coughlin’s love for and service to the School runs deep, serving as Head Prefect and Class Agent and subsequently as a trustee from 1988 to the present. “My family has a long legacy with the School, dating back to my uncles and father who graduated respectively in 1917, 1921, and 1923. My brother Terry graduated five years ahead of me in 1952.” After graduating from Williams, Coughlin dedicated 42 years as a mathematics teacher and legendary coach at Hotchkiss, from 1961 until 2003.

Balancing academics with athletics requires self-discipline and character, a skill Coughlin not only mastered but bestowed upon his students. He described his belief as this: “The duration of an athletic contest is only a few minutes while the training for it may take many weeks of arduous work and continuous exercise of self-effort. The real value of sport is not the actual game played in the limelight of applause, but the hours of dogged determination and self-discipline carried out alone, imposed and supervised by an exacting conscience. The applause soon dies away, the prize is left behind. But the character you build up is yours forever.”

“Trinity-Pawling helped me build my own character,” the wise school master reflected, “and the School continues to provide opportunities that promote growth and challenges that build character in the students today.”

We thank all three men for their commitment to the School and service to their own careers.